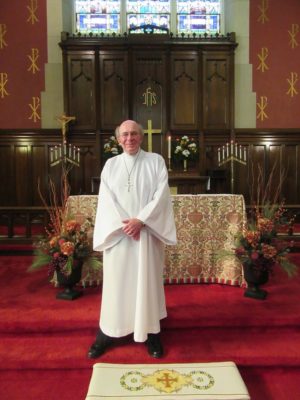 Vicar Ronald W. Costen brings experience in law, teaching and social work to his dual-site internship with LAMPa and Messiah Lutheran Church in downtown Harrisburg. A student at Lutheran Theological Seminary at Gettysburg, Costen is both a professor emeritus at Temple University and legal consultant, including service as a member of the Pa. Supreme Court Advisory Council on Elder Justice in the Courts.  He has a long career in social work and the law, particularly as an advocate for the aging, and served as deputy attorney general for the Pennsylvania Office of Attorney General from 1989 to 1997.

Throughout his nine-month internship, Ron will bring his experience to bear in connecting the congregation’s urban ministry to greater accompaniment with those in the community, shaping advocacy with and on behalf of that community as well as those around the Commonwealth facing similar challenges through his work with LAMPa.  Although Ron’s chief project at LAMPa will be to equip and coordinate advocates in the area of criminal justice reform, he will do so with the aim of addressing the underlying issues, such as mental health, poverty and addiction, that we all to often attempt to resolve with incarceration. Those interested in joining this work — particularly congregations already engaged in becoming healing communities for returning citizens — please contact Ron here.

With Messiah’s location just blocks from the Capitol, Ron’s presence will also strengthen the congregation’s ministry to those who work in state government.  Already, Messiah offers noonday worship on Wednesdays, and has participated in offering Ashes to Go at the Capitol on Ash Wednesday.

Though preparing for ministry of Word and Sacrament, Ron sees his work of the past 25 years as advocacy — on behalf of older Pennsylvanians and others who have been denied justice.

“I am delighted to be in this role,” says Ron. “I invite your prayers and ask that you provide me and LAMPa with concerns and insights that you believe we should address.”