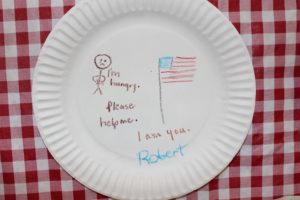 For three weeks leading up to Thanksgiving, members of Trinity Lutheran Church in Camp Hill learned about the many faces and root causes of hunger at home and around the world. With gratitude for their blessings,  young and old alike wrote letters of thanksgiving to lawmakers for the good work they have done and asked them to remember their hungry and vulnerable neighbors.

rawn by Trinity’s children thanking Gov. Tom Wolf and his Food Security Partnership for the progress being made toward making Pennsylvania hunger-free.  The governor also received letters asking for sustained support for the State Food Purchase Program as he prepares his upcoming budget proposal.

Members also wrote to members of Congress, urging them to renew the Children’s Health Insurance Program, without which some 9 million children could lose access to the most basic heath care. In addition, they thanked their state senators for their support of safe harbor legislation to protect child sex trafficking victims and urged their House members to do the same.

LAMPa is grateful to be part of the beautiful ministry of the disciples at Trinity and all across our Commonwealth!