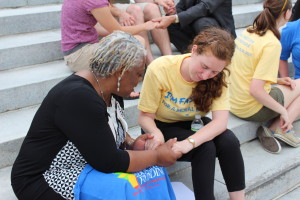 Lutherans from around the state raised their voices in Harrisburg at a rally for fair education funding June 23. Lutheran Advocacy Ministry in Pennsylvania (LAMPa) started the day by leading a prayer service on the steps of the capitol, joining other faith groups fasting there to protest Pennsylvania’s distinction of being the least equitable state in the country for education funding. NOW is the time to add YOUR voice against the injustice in the way we pass on God’s gifts to our children.

“We have come to our State Capitol to demand a moral budget that fully funds public schools” said the Rev. Carlton Rodgers of Tabernacle Evangelical Lutheran Church in West Philadelphia, in his stirring sermon on the capitol steps. “We are here today because chronic underfunding of some schools is having an adverse long-term impact on many communities in Pennsylvania and on our overall economy as well. Sadly, we are here today because even after receiving national attention regarding the plight of our schools and a mandate for more education funding from voters, the legislators in Harrisburg still don’t seem to be getting the message.”

Rodgers encouraged those at the rally to be bold in the face of the economic and political forces weighing against them – those that undercut educational opportunities for children of the poorest citizens in order to build prisons in which to house them later. Read the complete text of his sermon .

“We are loved by a gracious God who frees us to love our neighbors – that includes educating and equipping our children for their lives and vocations,” said The Rev. David Byerly, LAMPa policy council member and pastor of Grace Lutheran Church in Shamokin , Northumberland County, whose communities include rural schools who invest among the least per pupil of the state’s 500 districts.
“What we are here to discuss is a question of fair balance between present abundance for some and the need of others” Byerly said. “St. Paul wrote about this and used the example of God’s people in the wilderness gathering manna for their meals. ‘The one who had much did not have too much, and the one who had little did not have too little.’ Education is like manna. It is the way we feed and nurture young minds, and indeed, the whole person in the commonwealth, and we in the ELCA affirm the essential role of public education in serving the common good of society. “

And yet, it is clear from the results of our broken funding system, that the one who has little does not have enough, Byerly said. “Let us value every child in PA equally – just as God sees us all!