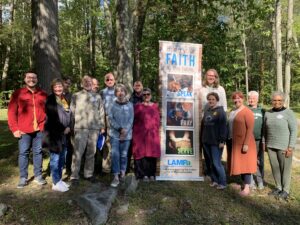 The Laurel Highlands served as a beautiful backdrop for LAMPa’s Policy Council retreat at Camp Sequanota in September.  The council, which began a new term Sept. 1, heard updates on legislative action and began discussion of possible policy priorities for the next term, based on what they are witnessing in their communities and synods.

“It’s always so good to be together — to be grounded in prayer and worship, and to share stories of what is happening in our congregations, communities and families,” said LAMPa Director Tracey DePasquale.  “This year, for a variety of reasons, we had so many new members that simply getting to share those things was important. Yet, in the wake of a Churchwide Assembly and with a new administration and new legislature set to take office in January, we had a lot of policy ground to cover. One day just never seems like enough, but it’s precious time.”

Policy Council began a preliminary examination of LAMPa’s ministry and advocates network survey to help guide their development of priorities for adoption in December. (Take the survey here.)  They also heard from Phoebe Morad, Director of Lutherans Restoring Creation, about the resources for supporting our growing network of green teams and the greenhouse gas memorial that was approved at August’s Churchwide Assembly. Continuing the focus on just transitions, the council also heard from ReImagine Appalachia about the implications of new federal infrastructure and environmental funding for Pennsylvania.

“It’s clear that the church can and should play a role in ensuring that those dollars are effectively spent — targeting communities most at risk and those already harmed — and that no one is left out of investments in priorities such as clean air, clean water, and broadband,” DePasquale said. “That may mean we wear out a lot of shoes, visiting our neighbors to make sure that they do, indeed, have access, and not just presuming that local governments are taking care of it. We need to hold governments accountable, yes, but local officials in some of our communities are working with threadbare budgets and need all the help and support they can get.”

Responding to requests from many across the state for ways to stay in relationship in spite of disagreement, Policy Council also heard from Julie Boler, Director of Community Relations for Braver Angels.  A small team is exploring the possibilities for collaboration and training for congregations and communities.  If you would like to be involved, send us a note.

“September’s Policy Council Retreat was meaningful to me in several ways,” said the Rev. D. Michael Bennethum, who was starting his first term. “I  appreciated getting to know some fellow Pennsylvania Lutherans who are passionate about issues of social concern. Presentations from Lutherans Restoring Creation, ReImagine Appalachia, and Braver Angels introduced me to new resources for creation care, career opportunities for those on the margins, and tools for engaging in respectful dialog with people across the political/ideological spectrum.”