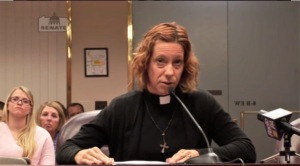 The Rev. Jennifer Crist testified to the dangers of re-traumatizing victims of child sex trafficking at a Senate Judiciary Committee hearing on Nov. 13.  She was accompanied by LAMPa staff and Sandra Bingaman, a representative of the Lower Susquehanna Synod Women of the ELCA, which has been active in working for Safe Harbor legislation that would protect these victims rather than criminalize them.

SB554 passed the Senate unanimously earlier this year, but it has been sitting without action in the House Judiciary Committee, chaired by Rep. Ron Marsico. The legislation would affirm that there is no such thing as a child prostitute by redirecting victims away from the criminal justice system into appropriate human services.

Crist, a second-career pastor in the Lower Susquehanna Synod who holds a degree in neuroscience and anatomy from The Pennsylvania State University at the Hershey Medical Center, testified from both a scientific and personal perspective.

“I am aware of what trauma does to the brains of children and youth, whose brains are not even fully developed, as they are experiencing trauma.  These children and youth are certainly not capable of understanding or processing what sexual exploitation means for their bodies and their brains,” Crist said.

She also spoke as a mother of seven children, four of whom are daughters, and some of whom are from Guatemala, where she has established  a non-profit ministry that focuses on the health and education of children from an orphanage and neighboring village.  See the full hearing and read Pastor Crist’s  testimony and others’ here.

“As Lutherans, we believe that government has a God-given function to protect all persons, including children, from criminal acts through just, fairly enforced laws,” Crist told the committee.  “In the case of sexually exploited minors, what is just is NOT to place these children in the criminal justice system, but rather to provide them with immediate and specialized services to begin the long process of healing from trauma.

“As a holy Christian people of faith, our baptism calls us to bring about justice and peace in all the world.  We respond out of our abundant faith as a people who are responsible for seeking wholeness where there is brokenness, light where there is darkness.  Sexual exploitation of children is certainly a place where brokenness and darkness are present. ”

Bingaman, after hearing all of the testimony, said, “These girls are putting them selves at such tremendous risks and once they are caught in the snare, there is so little chance for them to escape. They are naive and vulnerable, such easy prey for these perpetrators.  Once they are victimized, of course jail, detention centers and facilities simply reinforce their trauma of captivity.”

Join LAMPa and advocates from across the state in a day of advocacy for child sex trafficking victims at the Capitol on Dec. 5. Learn more and register here.   Please connect us if you will be there!