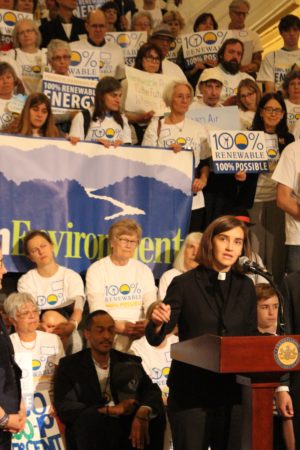 Hundreds of Pennsylvanians gathered under murals depicting Pennsylvania’s industrial history in the Capitol to rally for a new vision for the Commonwealth powered by 100% renewable energy. The attendees were joined by businesses, religious leaders, local mayors, and nurses and doctors to advocate for bipartisan legislation awaiting action in the General Assembly that would meet this goal by 2050 (HB2132, SB 1140).  The legislation has bipartisan support from 13 state Senators and 42 state Representatives.

“The transition to 100 percent clean, renewable energy would boost the creation of future jobs by harnessing a newly skilled workforce, and giving our universities the opportunity to advance new fields of technology as they educate a new generation of Pennsylvania’s technology-based workforce,” said State Rep. Chris Rabb (D-Philadelphia). “The need is clear and the vast majority of scientists agree: Climate change is real. We must seize the opportunity to become a leader in this industry – for our children, our communities and our commonwealth.”

“Jesus commanded his followers to love God and to love our neighbor, especially the most vulnerable, and climate change hurts vulnerable people here in Pennsylvania and around the world right now,” said the Rev. Inge Williams, pastor of Friedens Lutheran Church in Shartlesville and a member of LAMPa’s Policy Council. Read her entire remarks here.

Citizens roamed the halls of the Capitol wearing t-shirts calling for 100% renewable energy, with residents from nearly half of Pennsylvania’s  counties in attendance. After holding a massive rally in the capitol rotunda, attendees went to their respective elected officials in the state House and Senate to meet face-to-face with their elected officials and call for much-needed action to promote clean energy and tackle

“It’s time to make Pennsylvania run on solar shining on rooftops and wind blowing in hills,” said Adam Garber, Deputy Director for PennEnvironment. “And today, with hundreds gathered in Harrisburg advocating for bipartisan bill to do just that, it’s clear the future is bright.”

While attendees hustled from meeting to meeting, making the case for clean energy, businesses showcased the growing clean energy revolution in Pennsylvania at a Clean Energy Expo with educational tables throughout the capitol building.  This Expo included Pennsylvania companies like Pittsburgh-based EverPower, which highlighted wind farms and Philadelphia-based Solar States which focused on their solar installations on local businesses and homes. Energy conservation and efficiency companies also featured tips showing how Pennsylvanians could reduce their energy consumption, in turn reducing pollution and saving money on their utility bills.

PennEnvironment also displayed a video testimony entitled  Voices for 100, which  highlighted diverse voices in support for renewable energy, including testimonials from hundreds of experts and citizens from across the Commonwealth discussing why they support shifting away from fossil fuels.

“Renewable energy makes us safer and healthier, protecting our communities from global warming and from hazardous air pollution,” said Anthony Clarke, Co-Chair of the Climate Justice and Jobs team for POWER. “While the health impacts of climate change affect us all, they disproportionately affect the vulnerable and disadvantaged communities.”

“Pennsylvania has a long history and leadership of creating energy by mining our natural resources of oil, coal, and gas. With that history has come negative health consequences of black lung disease, cancers, asthma, and poor birth outcomes,” said Ruth McDermott-Levy, Associate Professor & Director, Center for Global & Public Health at Villanova University. “It is time for Pennsylvania to be a leader in energy again by harvesting our renewable resources of air and wind and in turn, protecting the health of Pennsylvanians and those beyond our state borders.”