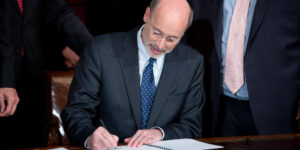 Gov. Tom Wolf announced that he has signed a new executive order establishing the first statewide goal to reduce carbon pollution in Pennsylvania, which is contributing to climate change. The executive order also establishes the GreenGov Council to boost green and sustainable practices in state government to help achieve the goals set in the executive order, while saving taxpayers money and creating jobs in the state’s clean energy economy.

“We applaud this step toward a more sustainable future,” said LAMPa Director Tracey DePasquale. “Our faith teaches us that we are stewards of creation, which includes caring for all who share this precious common home.” Contact LAMPa to join our network of advocates working to stem the threat of climate change.

“In the absence of leadership from the federal government, states and cities are stepping up and doing their part to reduce emissions,” said Wolf. “Today I am proud to declare the commonwealth’s intention to address climate change, the most critical environmental threat facing the world.”

The commonwealth will work to achieve a 26 percent reduction of greenhouse gas emissions by 2025 and an 80 percent reduction by 2050, from 2005 levels. The GreenGov Council will work with all state agencies to reduce energy use in state government and improve the energy efficiency of state buildings and vehicles, saving taxpayers money in the process.

The GreenGov Council will serve as a central coordinating body to promote the implementation of the executive order and the achievement of the following state agency performance goals:

The GreenGov Council will encourage and coordinate the incorporation of environmentally sustainable practices into the commonwealth government’s policy, planning, operations, procurement, and regulatory functions, and strive for continuous improvement in efficiency and performance.

Secretaries of the Departments of General Services, Environmental Protection, and Conservation and Natural Resources will co-chair the Council.

The governor announced the new executive order at an event celebrating the public-private collaboration happening in the city of Pittsburgh to help bolster the city’s climate action plan. Today, Peoples Gas announced a commitment to cut methane emissions from Pittsburgh’s distribution system by 50 percent using advanced leak detection methods developed in partnership with the Environmental Defense Fund and Google Earth Outreach to map and measure leaks coming from underground pipes. The pledge is the first of its kind by a United States utility.