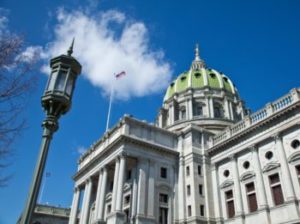 As the Pennsylvania General Assembly wrapped up its voting session last week, the hoped-for vote on Safe Harbor for child sex-trafficking victims stalled, but LAMPa advocates can take some consolation in the things that did not become law.

Children in Pennsylvania who are sexually exploited by traffickers become re-victimized when they are arrested and prosecuted for prostitution. SB851 would have redirected them toward the help they need, instead.  Several congregations included advocacy on this bill as part of “God’s work. Our hands.” Sunday, and the Lower Susquehanna Synod’s Women’s Organization passed a resolution in favor of the bill. The Senate was scheduled to vote on the bill in the last week, and Lutheran advocates sent many letters to lawmakers in favor of passage, but the bill was pulled from the Senate calendar without a vote.

Sponsors called Senate Bill 1379 a financial services credit ladder, but it was another high-cost borrowing trap.  The bill was introduced with just days to go in the session, prompting the payday lending coalition, of which LAMPa is a part, to react quickly. LAMPa and other faith-based advocacy organizations signed letters of opposition and promptly delivered to all lawmakers.  SB 1379 would have legalized long-term payday loans in Pennsylvania. Long-term payday loans are what many payday lenders have migrated to in an effort to avoid regulations targeted at their traditional two-week, balloon payment loans. SB 1379 would gut our existing cap on interest and fees for consumer loans by allowing fees and charges that could run the effective interest rate up to triple-digits. We wouldn’t know exactly how high it could go until after the bill passed and the Department of Banking sets the fee schedule. It’s clear that the payday lenders don’t want legislators to know what the total cost of these loans will be. But, we could guess. Here’s an example of a long-term payday loan from Check ‘N Go, the lead payday lender working to gut Pennsylvania’s consumer protections: Borrow $3,000 for a year, and pay back $7654 , which is a whopping 218% APR!

HB 1885 would have punished municipalities for refusing to honor requests by Immigrations and Customs Enforcement to detain undocumented immigrants. LAMPa advocates urged defeat of the bill, which nonetheless passed the House and the Senate, which approved with amendment in the final days of session, sending this back to the House Rules Committee, where it died while lawmakers attempted to reach a pension agreement.

It was feared this legislation would create mistrust between law enforcement and the immigration community.  There is no jurisdiction in Pennsylvania where ICE is unable to find and detain a resident on the basis of their immigration status. The “Sanctuary City” policies that this bill takes aim at simply allow local law enforcement to focus on their job – keeping our communities safe – without the additional burden of acting as federal immigration enforcement. Currently, 32 of Pennsylvania’s 67 counties have a policy not to honor ICE detainers, or optional requests to hold a person up to 48 hours after they would normally be released. In each of these localities, if ICE was able to produce a warrant, local law enforcement would indeed hold that person for additional time.

Law enforcement leaders around the country have uniformly rejected similar policies on public safety grounds. When local police are involved in immigration enforcement, people are less likely to report crimes or become active members of their communities. Immigrant communities already have a fear of law enforcement because of corruption in many immigrants’ home countries.  Read a Temple University study of the use of ICE detainers in Pennsylvania.

SB 562, which would have amended the Regulatory Review Act to allow the General Assembly to delay any regulation promulgated by the executive branch, passed both chambers and was vetoed by Gov. Wolf.   This bill would have allowed legislative committees to instruct the Independent Regulatory Review Commission to remove from its agenda final form regulations which the committee either disapproves or desires additional time for review, giving them the ability to stall indefinitely measures promoting human health and safety and protecting the environment.