ELCA Recommits To Work For Racial Justice and Inclusion 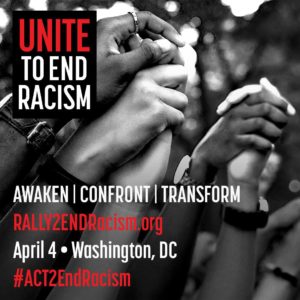 CHICAGO (April 6, 2018) – Following the “Act Now: Unite to End Racism” rally in Washington, D.C., the Rev. Elizabeth A. Eaton, presiding bishop of the Evangelical Lutheran Church in America (ELCA), has issued a statement on racism, recommitting this church “to work for racial justice and inclusion, to work against white privilege, and to be a church that truly welcomes all.” The April 4 rally was held in commemoration of the 50th anniversary of the assassination of Martin Luther King Jr.

In 2017, we observed the 500th anniversary of the Reformation. In 500 years, Lutheranism has grown into a global movement. We worship in every language all over the world. There are now more Lutherans of color than there are European descent Lutherans. But here in the United States, Lutherans are predominantly white.

Lutherans came to this country in ethnic waves in the 18th and 19th centuries. English was not our first language; we kept to ourselves and were mostly outside of the predominant American culture. But Lutherans did share in the dominant culture in that we were mostly white and, therefore, had the privilege of not having to think or talk about the reality of racism in America.

We came to a tipping point in June 2015. There, in Charleston, S.C., a stranger walked into a Bible study at Mother Emmanuel and, after being welcomed by pastors and people, shot and killed nine. The martyrs of Mother Emmanuel. Two of those killed, the Rev. Clementa Pickney, pastor of Mother Emmanuel, and the Rev. Daniel Simmons, associate pastor, were graduates of Lutheran Theological Southern Seminary. The shooter, Dylann Roof, is a member of one of our (ELCA) congregations. One of our own shot and killed two who had adopted us as their own. All of a sudden, and for all of us in the ELCA, this was an intensely personal tragedy. Racism wasn’t something outside of us; it was in us and had been all along.

We still have work to do. Within the ELCA, we have named the reality of institutional and structural racism. We have begun to pry Lutheran identity away from European descent identity. It is not culture and cuisine that define us but our common witness to the gospel. We recommit ourselves to work for racial justice and inclusion, to work against white privilege, and to be a church that truly welcomes all. We cannot do this work alone. We will work with ecumenical and interreligious partners. We will show up. We will speak up. We will act up.

The martyrs of Mother Emmanuel were not the first victims of violence. Martin Luther King Jr. was not the first victim of violence. Our only hope is in the innocent One who was violently killed on Good Friday, Emmanuel, God with us. He was wounded for our transgressions including the deadly sin of racism. But as he rose from the dead, we are able to rise up.

The work is not over.  Following the rally on the anniversary, our commitment is to awaken to the trauma of racism and the legacy of white privilege in the United States through self-evaluation and institutional assessment
of embedded racism; to confront racism and white privilege through disciplined truth-telling coupled with strategies in the areas of church life and practices, and thus transform the hearts, minds and behaviors of people and institutions.

Click here to learn where we must move forward together.