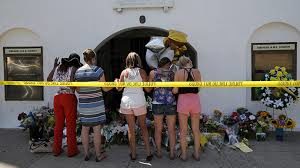 The documentary “Emanuel” will be screened in theaters nationwide June 17 and 19. It follows the journey of the Mother Emanuel African Methodist Episcopal (AME) Church in Charleston, S.C., after the racially motivated shooting of nine members during a Bible study on June 17, 2015. The documentary features interviews with survivors and family members, telling a poignant story of love and hate, faith and justice, and the healing power of forgiveness.

Featuring intimate interviews with survivors and family members, EMANUEL is a poignant story of justice and faith, love and hate, examining the healing power of forgiveness. Marking the fourth anniversary, EMANUEL will be in movie theaters across the country for two nights only, June 17 and June 19. Click here to view the trailer and access a list of screening locations. It is anticipated a study guide will be made available for group viewing.

June 17 will mark the 4-year anniversary of the Emanuel AME Church shooting in Charleston, S.C. The Evangelical Lutheran Church in America (ELCA) is saddened by the all-too-frequent occurrences of gun violence in the U.S. We mourn the loss of life. We grieve for the victims and their families, who often feel silenced. And we lament for those who have done violence to others and often feel removed from a community of faith.

The ELCA invites you on a journey of prayer, scripture, stories and church teachings with a new resource, “A 60-Day Journey Toward Justice in a Culture of Gun Violence.” Together through daily observances, it calls us to work toward the prevention of gun violence as people of God who strive for justice and peace in all the world. It may be used for individual reflection, group Bible study, adult education sessions, and congregational daily devotions. Your journey is intended to start on June 16th, but this resource can be used at any time. Click here to access the resource.