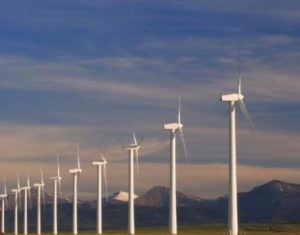 Global emissions are reaching record levels and show no sign of peaking. The last four years were the four hottest on record, and winter temperatures in the Arctic have risen by 3°C since 1990. Sea levels are rising, coral reefs are dying, and we are starting to see the life-threatening impact of climate change on health, through air pollution, heatwaves and risks to food security.

The impacts of climate change are being felt everywhere and are having very real consequences on people’s lives. Climate change is disrupting national economies, costing us dearly today and even more tomorrow. But there is a growing recognition that affordable, scalable solutions are available now that will enable us all to leapfrog to cleaner, more resilient economies.

The latest analysis shows that if we act now, we can reduce carbon emissions within 12 years and hold the increase in the global average temperature to well below 2°C and even, as asked by the latest science, to 1.5°C above pre-industrial levels.

We have the Paris Agreement – a visionary, viable, forward-looking policy framework that sets out exactly what needs to be done to stop climate disruption and reverse its impact. But the agreement itself is meaningless without ambitious action. 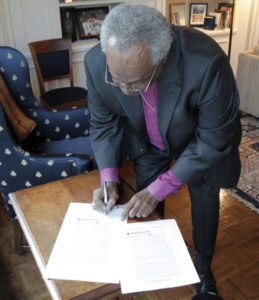 On Sept. 24, Presiding Bishop Michael Curry added his signature to a joint statement between The Episcopal Church, the Evangelical Lutheran Church in America and the Lutheran Church of Sweden outlining the churches’ “call to join in the care of creation.” Photo: Lynette Wilson/Episcopal News Service

Lutherans, along with their faith siblings participated in the summit.  Following the summit, on Sept. 24, faith-based organizations held a daylong interfaith event to address that emergency, meeting at The Salvation Army in New York’s midtown Manhattan, a half-mile from United Nations headquarters and a day after world leaders met in a climate summit to discuss plans to meet the objectives laid out in the Paris agreement. Episcopalians, Lutherans, Roman Catholics, United Methodists, Muslims, Buddhists and Baha’i representing some 48 organizations came together to strategize ways faith-based organizations can address climate change by filling the gaps left by governments in regard to climate change and adaptation to its effects. Learn more.

UN Secretary-General António Guterres is called on all leaders to come to New York on 23 September with concrete, realistic plans to enhance their nationally determined contributions by 2020, in line with reducing greenhouse gas emissions by 45 per cent over the next decade, and to net zero emissions by 2050.  Learn more.