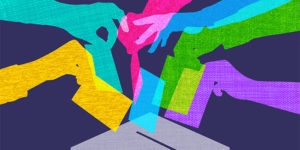 The U.S. Supreme Court rendered a decision Monday that will allow Pennsylvania to count mailed-in ballots received up to three days after the Nov. 3 election. The justices were divided 4-4, an outcome that upholds a state Supreme Court ruling that required county election officials to receive and count mailed-in ballots that arrive up until Nov. 6, even if they don’t have a clear postmark, as long as there is not proof it was mailed after the polls closed.

Chief Justice John Roberts joined with the three liberal justices to reject Pennsylvania Republicans’ call for the court to block the state court ruling. Justices Samuel Alito, Neil Gorsuch, Brett Kavanaugh and Clarence Thomas would have required the state to stop accepting absentee ballots when the polls close on Nov. 3.

There were no opinions accompanying the order, so it is impossible to know what motivated either group of justices. The conservative justices have been reluctant to allow court-ordered changes to voting rules close to an election.

Republicans, including President Donald Trump’s campaign, have opposed such an extension, arguing that it violates federal law that sets Election Day as the first Tuesday after the first Monday in November and that such a decision constitutionally belongs to lawmakers, not the courts.

The Democratic majority on the state’s high court had cited warnings that postal service delays could invalidate large numbers of ballots and increased demand for mail-in ballots during the coronavirus pandemic to invoke the power, used previously by the state’s courts, to extend election deadlines during a disaster emergency.

As of Monday, voters had requested 2.8 million mail-in and absentee ballots — 1.79 million by Democrats and nearly 694,000 by Republicans, according to data provided by the Pennsylvania Department of State.  Almost 900,000 ballots have been returned.

Elections officials sought the extension for several reasons. Not only were there concerns about mail delays and a record number of mail-in ballot applications, but also the tight, seven-day turnaround between the last day voters can request a mail-in ballot and Election Day.

The House and Senate returned to Harrisburg on Monday for their last three days of scheduled voting sessions before the election.  Prior to Monday, there appeared to be bi-partisan support to pass legislation authorizing counties to process mail-in ballots before Election Day.  This process is called pre-canvassing. LAMPa encouraged pre-canvassing along with the county commissioners association.  It appears at this time there will be no additional movement on election laws that will affect the Nov. 3 election.

PA Secretary of State Kathy Boockvar states she believes most of the votes will be counted by the Friday after Election Day. She does not anticipate counties to have any problem certifying election results by the Nov. 23 deadline.