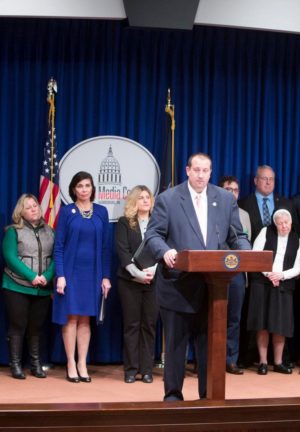 Lutheran Advocacy Ministry in Pennsylvania was honored to join Rep. Seth Grove , R-York, and Sen. Kristin Phillips-Hill, R-York, as they announced  their intent to introduce legislation to increase fines and prison sentences for criminals convicted of human trafficking.

LAMPa Director Tracey DePasquale, Program Director Lynn Fry, and other members of the Pa. Interfaith Justice Coalition stood in support of Grove, Phillips-Hill and Commonwealth Victim Advocate Jennifer Storm at a press conference unveiling the “Buyer Beware” legislation.  LAMPa advocates worked for years on related legislation known as the Safe Harbor Act, which passed the General Assembly unanimously and was signed into law by Gov. Wolf in October. That law protects child sex-trafficking victims from being charged with crimes they were forced to commit by their traffickers.

“We applaud Rep. Grove and Sen. Phillips-Hill for recognizing the seriousness of these crimes and the importance of severe consequences as a deterrent to those who would seek to rob the most vulnerable, especially children, of their dignity in such a way,” DePasquale said. The average age at which a person begins to be trafficked is between 12 and 14 years of age. That is why, Grove said, there is significance to having his legislation be House Bill 12.

The bills would increase the maximum jail sentence and fines for an individual convicted of trafficking or patronizing a victim of trafficking. In light of the connection between prostitution and human trafficking, the legislation would also increase fines for repeat offenders. The money from this fine would go to fund grants given to anti-trafficking programs and the Safe Harbor for Sexually Exploited Children Fund. The bill would also expand the definition of human trafficking in the state Crimes Code to match federal law. To read more about the bill, click here.