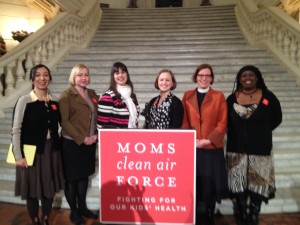 LAMPa Director Amy Reumann took part in a press conference with Mom’s Clean Air Force that focused on the impact of climate change on children. See a video clip. Here are her remarks, followed by those of some of the other presenters.

In the book of Jeremiah, the prophet writes these strange words:

‘The parents have eaten sour grapes, and the children’s teeth are set on edge.’

The sour grapes to which the prophet is referring are the mistakes, blunders, idolatry and greed of their forbears, whose poor choices years ago continue to leave a bad taste in the mouths of their descendants. The selfishness and inaction of the previous generation punishes their children and their children’s children . It reminds us that the choices we make as individually and as a society carry vast implications for those who come after us.

Jeremiah’s sour grapes are particularly apt when it comes to decisions we make now about our changing climate and how we mitigate, adapt to and most importantly prevent what we still can, for the sake not only of our own health, but that of our children and generations to come.

The faith community is diverse, but one of the things we have in common is an increasing concern about the impacts of human-caused climate change. Why? Because we share a common conviction that the earth is God’s creation and that we are called to be good stewards of it, that we are called to serve and protect the rest of creation.

Another common element shared by numerous faith traditions is concern for our neighbors, and particularly for the most vulnerable—children, the elderly, those who live in poverty, the refugee. We know that climate impacts such as more severe storms, long term drought, flooding and sea level rise, are falling hardest on those who lack the means to adapt and recover—people in developing nations and in low income communities in developed nations.

Right now our development and relief organizations are at work in communities where a changed climate is causing drought and hunger, stunting the growth and impeding the healthy development of children.

We are responding to the plight of climate refugees, parents and children fleeing places where climate change has brought food insecurity and water scarcity, or where societal conflict occurs over shrinking resources.

We are among the first to respond when disaster strikes, and among the last to leave as lives are rebuilt, as work continues to help rebuild schools and homes in the Philippines devastated by Supertyphoon Haiyan, and we sent armies of volunteers to gather supplies and clean up after Hurricane Sandy.

And closer to home, my colleagues on this podium will attest to the immediate effects on the health and well being of children  in our commonwealth that demand our immediate attention, for their sake and that of future generations.

Climate change is killing children now. And the ones who bear the greatest responsibility for it are not those suffering the most from its impact – the poor, the vulnerable, communities of color – but it is those of us who live in developed countries. Burning fossil fuels and a lifestyle that demands them is making children sick, right now. We owe these children, and our own, better decisions and action.

The Evangelical Lutheran Church in America, along with partners such as Pennsylvania Interfaith Power and Light, supports the goals of the U.S. Environmental Protection Agency proposed rule under the federal Clean Air Act to reduce emissions of carbon dioxide from existing power plants, a step towards modernizing our nation’s power plants while limiting our contribution to global climate change.  The Clean Power Plan is expected to lead to climate and health benefits worth an estimated $55 billion to $93 billion in 2030, including avoiding 2,700 to 6,600 premature deaths and 140,000 to 150,000 asthma attacks in children. It is not the only thing we can do, but it is an important step in the right direction. Religious leaders will be taking to the pulpit this month at the annual Preach in for Global Warning to speak to the moral issues in a changing climate and to urge Pennsylvania to adopt the strongest standards to transition to a cleaner energy economy.

We are faced with an important choice. If we do nothing now, the sour grapes we eat serve our children the bitter fruit of the mounting devastation to global health of humankind and the rest of creation. Or we can act now, and help to protect future generations and God’s creation from the worst impacts of climate change.

We know that Pennsylvania produces more heat-trapping gases that drive climate change than 101
countries combined and is the 3rd worst state in the United States for producing these harmful emissions.

We see the results of this pollution in the studies that show that 836,880 Pennsylvania adults and 228,593 children already suffer from asthma. Every summer, smog-forming pollutants send 10,000 Pennsylvanians to hospital emergency rooms, and Pennsylvanians suffer 370,000 smog-related asthma attacks. Children and elderly people are particularly vulnerable to poor air quality. Rising temperatures lead to higher levels of smog and soot.

Without change, many more people will suffer from asthma and other respiratory and cardiovascular illnesses and deaths. In 2012, the Coal Blooded Report found that approximately 68% of African Americans live within 30 miles of a coal plant and low income communities are also more likely to be host to a coal plant. 71% of African Americans live in districts in violation of air quality standards. The impact is clear in the rates of respiratory illnesses in these communities. African American children are twice as likely to die of asthma and 3 times more likely to be admitted to the hospital for an asthma attack and adults are more likely to die of lung disease while being less likely to smoke. Latino American, Native American, and low income communities that are host to these plants also have higher rates of respiratory illnesses and other conditions.

With the mercury, arsenic, lead, sulfur dioxide, nitrogen oxide, and other pollutants that come from coal plants in communities nationwide, these conditions are creating lethal gas chambers for communities that are host to these facilities. So the true costs of greenhouse gases and other pollutants for these communities include loss of life at worst, but also ER room visits, lost days of school with compromised educational outcomes, lost days of work with lower pay and compromised promotion opportunities, and more.

On the other side we see the impacts of climate change driven by these polluting practices:
2014 was the hottest year on record and it only stands to get worse. A fourfold increase in ozone action days is expected by the end of the century which will result in increases in populations of the insects that like to live in those states. Philadelphia will experience temperatures above 90 degrees Fahrenheit for more than 80 days every year, Pittsburgh will get about 65, Erie will get almost 50, Harrisburg about 75, Scranton and Allentown about 70 and State College about 65.
Affordable access to nutritious foods will only lessen as climate change affects crops. Already so many communities of color and low income communities are food deserts, where children have better access to Doritos or Cheetos than broccoli or strawberries. This results in higher rates of obesity, as well hunger, and all of the health conditions that result from poor diet, such as diabetes, heart disease, high blood pressure and more.

We work with with coastal communities from Alaska to Florida, facing displacement in the next 20 years, due to sea level rise and storm surge and right here in PA, there are multiple coastal communities who can see similar impacts in years to come. In Eastwick, PA folks are already being inundated by flooding because the homes of communities there were built in a flood plain and they aren’t alone.

When I did hurricane relief after Katrina and Rita, the throngs of people who walked through the doors of the disaster recovery center were many and diverse. But they were largely African American and low income. I met scores of people with hearing impairments with no qualified interpreter to help them navigate the system. I encountered people with HIV and AIDS who went weeks without access to their life-preserving antiretroviral drugs. I met women who encountered sexual assault in the aftermath of the disaster. I met hundreds of people who had to completely start over after only escaping with their lives.

Again, the cost of inaction on carbon pollution is the health, livelihood, culture, economic, and social wellbeing of communities worldwide, with vulnerable communities being hit first and worst.
We must establish aggressive targets for climate action including ramping up pollution reduction and significantly increase our focus and action on energy efficiency and clean energy while creating good jobs. Our upcoming Pennsylvania report, Just Energy Policies: Reducing Pollution Creating Jobs, demonstrates that Pennsylvania has all of the sun, wind, and underground heat necessary to make the transition from fossil fuel burning that is heating our earth. If strengthened and enacted effectively, aggressive climate action could affect climate and health benefits worth an estimated $55 billion-$90 billion by 2030.

Decades of pollution from coal plants and other industries have led us to where we are now, already experiencing devastating health effects and catastrophic climate change. We must and we can get this situation under control for all of our sakes and most significantly for the health and wellbeing of our children. Thank you.