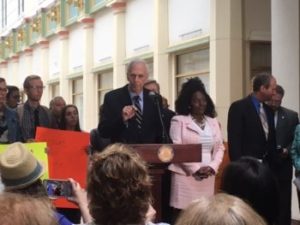 Senate Bill 554, which would provide “Safe Harbor” for victims of child sex trafficking, was voted out of the House Judiciary Committee on Tuesday, June 5.  The legislation, which LAMPa and others have been advocating for years,  is poised for a full House vote.  Click here to learn more and push for its final passage.  Speaking at a press conference, Senator Stewart Greenleaf, R-Bucks, thanked everyone who has worked on the bill since its initial inception in 2014. Click here for a link to a video of the press conference. Greenleaf is the primary sponsor of the bill. Senator Greenleaf thanked House Judiciary Chair Rep. Ron Marsico, Democratic Chair  Rep. Joseph A. Petrarca, Rep. Tarah Toohill and Rep. Joanna McClinton for their support.

Greenleaf  also thanked all of the advocates present for their unwavering support. “Safe Harbor” advocates, including LAMPa Program Director Lynn Fry, were in the Capitol on June 5 visiting legislators encouraging them to vote for the bill when the committee took its vote.  Greenleaf noted the fight is not yet over and everyone needs to continue contacting their state representatives, write letters to the editor, and encourage friends to also contact representatives to support SB 554.

The current bill focuses on four related goals:  protect and not prosecute child victims; empower state agencies to support child victims; train police to identify and help child victims; and establish a fund for victim services and awareness. SB 554 requires that minors (anyone under 8-years-old) be granted immunity from prosecution for the crimes of (1) prostitution and (2) obstruction of the highway, which is often charged in place of prostitution.  Additionally, the bill provides for alternatives to charging child victims of human trafficking with prostitution-related offenses if committed as a result of their victimization, including: (1) criminal trespass, (2) false identification to law enforcement, (3) disorderly conduct, (4) loitering and prowling at night, and (5) simple possession of a controlled substance.

The second goal of SB 554 requires the Department of Human Services, in conjunction with county agencies, to develop and provide specialized services for sexually exploited children, including: housing, education, employment, therapy, mental health services, substance dependency treatment, medical care, clothing, case management services, tattoo removal, or any other needs the victims may have.

The fourth goal of the bill is to establish a fund created through convicted traffickers’ and sex buyers’ fines.  The fund will be used to enhance victim services and increase public awareness about human trafficking.

LAMPa will be sharing Advocacy Alerts as the bill moves forward. We encourage you to respond and share with others.  If you have a personal story you are able to share regarding this bill and subject we invite you to contact us.  Legislators consistently share with advocacy visitors the importance of sharing personal stories with their legislators to personalize the need to pass particular legislation.