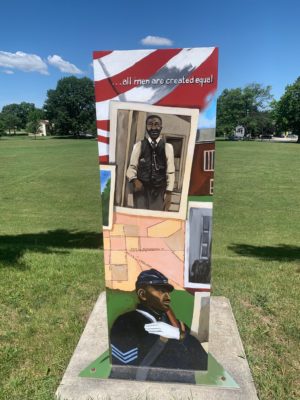 In late April this year LAMPa joined with United Lutheran Seminary in the celebration of rogation. ULS’s spring convocation around the theme “The Theology of Gathering” helped Lutherans across Pennsylvania think about the ways in which we are connected, even as we distanced ourselves due to the COVID-19 pandemic. In recognizing this theme, and seeking to honor creation as spring bloomed, LAMPa staff facilitated the gathering of soils from across the commonwealth. These soil samples represented farms, gardens, parks, polluted waters, and more, and were shared with synods who later blessed them in rogation services held throughout the spring and summer. As rogation services occurred, LAMPa provided ways in which we, as stewards of God’s creation, can care for each other and the earth through advocacy.

As summer progresses, LAMPa will highlight stories that accompanied the soils shared between our synods. This article features the stories of historically marginalized peoples who have shared and steward the lands we share. 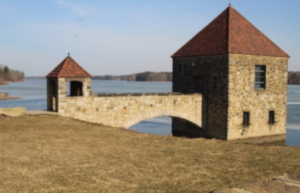 The first of our stories comes from Linda Armstrong in Northwestern Pennsylvania Synod. She shared with us the story of Pymatuning State Park, and what that place means to her. Linda has a long history and relationship with the park, having worked there for nineteen years as the Environmental Education Specialist. She notes the importance of recognizing the peoples who originally stewarded the land. The Iroquois cared for and survived off the lands that now provide recreational opportunities for more than 3 million visitors annually. The soil Linda shared comes from the Gate House, an entry point into the 17,000-acre reservoir that brings the natural joys of birding, boating, camping, fishing, hiking, and swimming to many.

In recognizing the spiritual importance of the care with which indigenous peoples first stewarded the land, Linda offers this prayer from the Iroquois nation:

“We are all thankful to our Mother, the Earth, for she gives us all that we need for life. She supports our feet as we walk about upon her. It gives us joy that she continues to care for us as she has from the beginning of time. To our Mother, we send greetings and thanks.” 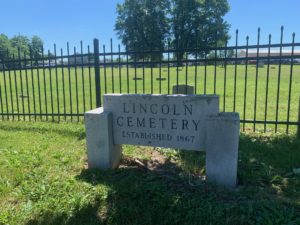 Located between South Washington Street and Long Lane, the cemetery holds thirty Union soldiers belonging to the United States Colored Troops (U.S.C.T.) who had been denied burial in the National Cemetery because of the color of their skin. Segregationist policies demanded they be buried elsewhere. Many of Gettysburg’s earliest African American settlers are also buried in the cemetery. They were disinterred from the “Colored Cemetery” after that site was cleared in 1906 to make way for new housing.

Much of the story of Lincoln Cemetery has been told by Betty Myers, who tends to the cemetery and leads the Lincoln Cemetery Association from her home, which borders the property. Her research took off when she came across the Sons of Good Will 1865 minute book, which inspired her to write a book on the cemetery.

Recently, though, Betty has been concerned with the disrespect shown toward the cemetery and the people who care for it. Gravestones have been rearranged without notice, curbs installed to prevent people from driving into the fence, and garbage is strewn along the perimeter of the property. “People are destroying history,” says Myers, “it was never respected as a cemetery; it was a graveyard.” Now, in advanced age, Myers sees a need for a new generation of people to protect Lincoln Cemetery and steward its history. 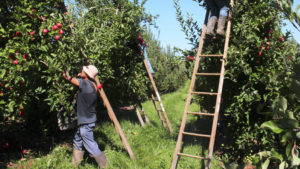 Just as people like Myers have helped to preserve the legacy of our disenfranchised communities and their lands, so too have they worked to advocate and care for present communities facing similar hardships. Speaking from the Lower Susquehanna Synod, Rev. Carla Christopher-Wilson reminds us of the role that immigrant farm laborers play in growing the food that nourishes us. From their varied backgrounds these diverse peoples have been planted throughout Pennsylvania. As our social message “Immigration” reminds us, in the face of often exclusive and restrictive national policies towards immigrants and migrants, we as Christians are called to recognize that all people are God’s children and are worthy of respect and welcome.

Rev. Carla offers this prayer for the migrant and the asylum seeker.

“We pray for immigrant families and asylum seekers incarcerated in detention centers on Pennsylvania soil and working in the fields and orchards… For families that are separated, for asylum seekers that have experienced trauma and loss, for individuals of strong faith and brave commitment to a better future for their families, we pray for protection, support, help, and healing.”

Disenfranchised and historically marginalized peoples have and continue to be important stewards of God’s creation and our shared legacies. As a church, we lift-up and support these communities and their voices. “In the Scriptures, God surveys creation and deems it good,” says the ELCA social message “Human Rights.” “This good creation is a rich, varied and bountiful one in which all of God’s creatures have integrity and value. The ELCA teaches that this gracious God grants humankind the gifts of agency, reason and spirit, directing it to help order and shape creation so that all may continue to flourish. The God-given purpose for humankind (the imago Dei) imbues each human being with a shared dignity.”