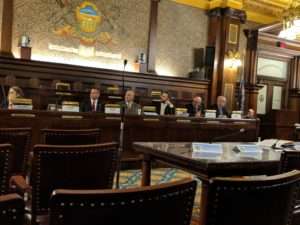 One year after a man shot and killed 11 members of the Tree of Life Synagogue in Pittsburgh, PA, religious leaders gathered in the state capitol in Harrisburg to become more educated about methods to increase security and potentially thwart future incidents. Representatives from the Pennsylvania State Police, Federal Bureau of Investigation, Department of Homeland Security, United States Secret Service, United States Postal Inspector, Anti-Defamation League (ADL) and the PA Criminal Intelligence Center shared best practices and tools that religious organizations can use to harden themselves as a target, versus being a soft target.

The Rev. Richard Geib, senior pastor at Tree of Life Lutheran Church, Harrisburg attended the seminar. He remarked, “While we would like to think of our places of worship as welcoming and secure, where our members, friends, visitors and strangers can worship and fellowship together, our communities can also be targets for malicious acts. Today’s security workshop, sponsored by the PA Jewish Coalition, established the reason why local congregations need to take security issues seriously.”

A new report from the ADL shows that since the Tree of Life attack, law enforcement has stopped 12 potential attacks against the Jewish community and five against other houses of worship. The ADL says Jews are the most targeted group, historically always on heightened alert. But now attacks on mosques and churches have virtually all religions trying to keep their congregants safe.

Local and federal law enforcement agencies say it’s important to stay vigilant, and if you see something, say something. Several agencies represented at the summit will provide security assessments for congregations free of charge.

It is anticipated additional summits will be scheduled around the commonwealth.

Following on the heels of a unanimous Senate vote last week, the Pennsylvania House of Representatives, concurring in the Senate amendment to House Bill 859, which provides $5 million in funding for non-profit entities to improve security in their communal spaces. This legislation will now move to Governor Wolf’s desk for his signature, after which it will take immediate effect.

The amendment to HB 859, once implemented, will allocate funds to protect institutions that are targets of violent hate crimes. The bill establishes a Pennsylvania Nonprofit Security Grant Program to fund security upgrades for communal facilities used by churches, synagogues and other non-profit entities deemed at risk.