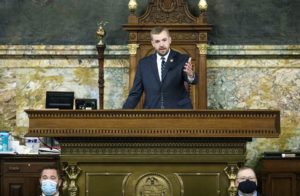 A new slate of leaders was elected in the House Republican Caucus following the resignation of former PA House Speaker Mike Turzai, effective June 15. Turzai, who resigned his House seat with five months remaining in his term accepted a position as general counsel for Peoples, a Pittsburgh-based gas utility.

Cutler previously served as House majority leader and the majority whip. A lawyer and former x-ray technologist, he’s made health care reforms a cornerstone of his extensive impacts in Harrisburg. His time in the Capitol is defined by finding bipartisan solutions to some of the state’s most pressing issues, including authoring Pennsylvania’s most comprehensive election reforms in the last 80 years and a statewide overhaul of the Affordable Care Act, both of which were signed into law this session.

“Our chamber, one of the oldest democratically elected bodies in the world, has never shied away from finding solutions to countless issues facing mankind,” Cutler said in his remarks on becoming Speaker. “This importance of this moment in history is not lost on me, and I give my word to all Pennsylvanians that the sincerity and fairness with which I serve will never be in question.”

House Republicans chose Rep. Kerry Benninghoff (R-Centre/Mifflin) to serve as the next majority leader. Most recently serving as majority whip, Benninghoff has held several leadership positions within the state House, including two terms as Majority Policy Committee chairman and chairman of the House Finance and State Government committees.

“We are grateful that Speaker Cutler named the gravity and the potential of this moment in history — for our commonwealth and the world,” said LAMPa Director Tracey DePasquale. “We appreciate his promise of sincerity and fairness and look forward to working with him to advance the common good and the cause of justice.  Join us in prayers for Speaker Cutler, Rep. Benninghoff and the whole General Assembly during this transition.”

Almighty God, we lift before you all who govern this Commonwealth. May those who hold power understand that it is a trust from you to be used, not for personal glory or profit, but for the service of the people. Drive from us cynicism, selfishness, and corruption; grant in your mercy just and honest government; and give us grace to live together in unity and peace; through Jesus Christ our Lord.
Amen.