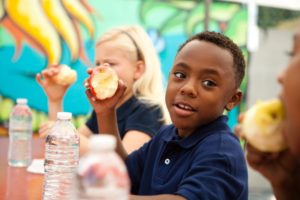 Although more Pennsylvania students participated in school breakfast programs in 2016-2017, the state’s ranking in the percentage of eligible students participating dropped to 41st in the nation, according to the scorecard recently released by the Food Research and Action Council. This annual report analyzes participation in the school breakfast program among low-income children nationally and in each state and the District of Columbia for the 2016-2017 school year. The report also features best practices for increasing participation in the program, including breakfast after the bell models and community eligibility.

See participation data for your local school in the 2016-2017 school year.

More low-income students and schools than ever before are participating in the national School Breakfast Program. In the 2016–2017 school year, nearly 12.2 million low-income students participated in the program, an increase of 0.6 percent when compared to the prior school year. While participation has continued to increase, the rate of growth slowed during the last school year, from an average of 390,000 additional students in each of the four preceding years to almost 70,000 additional students in the 2016–2017 school year.

This continued growth in participation — although slower than in previous years, likely because the economy is
shrinking the number of low-income students — is due to more schools moving breakfast out of the cafeteria and
into the classroom, making it part of the school day; broad implementation of the Community Eligibility Provision,
which allows free breakfast and lunch to be offered to all students in high-poverty schools and districts; and
improvements to how low-income children are identified as eligible for free school meals. These strategies have
contributed to substantial growth over the past decade — 4.1 million more low-income children received school
breakfast in the 2016–2017 school year than in the 2006–2007 school year.

Efforts to increase breakfast participation pay off — school breakfast leads to improved dietary intake, reduced food
insecurity, better test scores, improved student health, and fewer distractions in the classroom throughout the
morning. See the Food Research & Action Center’s Breakfast for Learning, Breakfast for Health, and The
Connections Between Food Insecurity, the Federal Nutrition Programs, and Student Behavior for summaries
of the research on the health and learning benefits of school breakfast. LAMPa supports the Food Research & Action Center’s ambitious but attainable goal of every state serving 70 low-income students breakfast for every 100 who eat school lunch, which would result in nearly 2.9 million additional children a year experiencing the positive academic and health outcomes that are linked to participating in school breakfast. The sustained increase in participation each year is helping to move the nation closer to this goal, but the slowed rate of growth in the 2016–2017 school year signals the need to redouble efforts to grow participation.