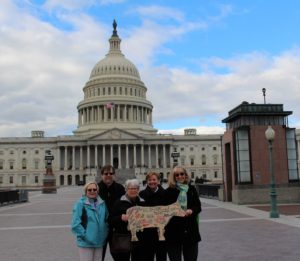 Eleven World Hunger Leaders from across Pennsylvania, joined Tracey and Lynn, to participate in the ELCA World Hunger Leadership Gathering, January 21-24. More than 150 leaders from across the country gathered at Reformation Lutheran Church, Washington, D.C., focusing on the theme “Until All Are Fed”. All in attendance were equipped to advocate to their state’s congressional leaders on the Farm bill and other public policy issues toward a just world where all are fed. To learn more about the Farm Bill and how you can take action click here. Following a congressional prayer breakfast, the 11-member Pennsylvania delegation met with staffers at Senators Pat Toomey and Bob Casey’s office. The group also visited Pennsylvania Representatives Tom Marino; Glenn Thompson; Mike Kelly; and Mike Doyle. Group members shared stories of a 20% increase in seniors needing food at Feast of Justice in the past six months; the increase in need in the third and fourth weeks of the month because SNAP isn’t going far enough; and the need for the inclusion of crop insurance as the fruit trees and vineyards potential failing because of extreme weather/climate change in the Northwestern Pa Synod. Everyone in the Pennsylvania delegation expressed how positively they felt about the advocacy visits and the content of the gathering.

The Rev. Lisa Barnes reflected on her experience: “Advocates are some of the most high-energy, passionate folks I know, as evidenced by those in attendance at the 2018 ELCA World Hunger Leaders Gathering in Washington, D.C. last week. As we prepared to visit our legislators and advocate on behalf of the Farm Bill, the energy at our “home base” – Lutheran Church of the Reformation – was palpable. What an amazing, grace-filled experience to see 150 hunger leaders, from all over the ELCA territory, fan out across Capitol Hill. Together, we spoke in support of programs that feed the hungry, honor land rights for indigenous peoples, assist farmers, and promote conservation and research.”

“The idea for the Cow Challenge came from the La Crosse Synod in Wisconsin and was shared at the July 2016 ELCA World Hunger Gathering in Chicago. Representatives from the La Crosse World Hunger committee brought several plywood cows representing cows which had been earned by various congregations during their project. To stir up interest in giving to World Hunger, they challenged their member congregations to raise enough money for cows at $500.00 each through the ELCA Good Gifts Catalog. The response was tremendous! They ended up displaying 174 plywood cows on the lawn at their synod assembly.
In the fall of 2016, we in the Erie, PA, area had a gathering of all those interested in issues relating to world hunger to meet with Sharon Magnussen from ELCA Churchwide, Pr. J. Kenneth Laber, and others from our Northwest Pennsylvania Synod to encourage more involvement in world hunger needs both in our own communities and around the world. The Cow Challenge was introduced, and the idea took root. The first church to accept the challenge was St. Paul’s Lutheran Church in Erie, PA. Shortly, St. Peter’s Lutheran Church in North East, PA, took up the challenge. Between these two Erie County Lutheran churches, fourteen cows were purchased through the ELCA Good Gifts Catalog. We decorated plywood cows representing each cow.
St. Peter’s brought a blank cow to the ELCA World Hunger Gathering in January 2018 in Washington D.C. It seems that not only were many signatures collected on the cow, but there was considerable interest generated among those present to take the idea back to their congregation! We cast our “seeds” and never know where they might take root.”

We will continue to forward Farm Bill Advocacy Alerts as they become available.