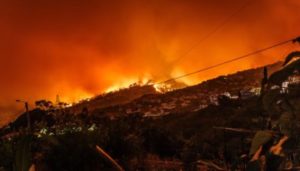 “Climate change creates new risks and exacerbates existing vulnerabilities in communities across the United States, presenting growing challenges to human health and safety, quality of life, and the rate of economic growth.” That’s according to the Fourth National Climate Assessment,  released the day after Thanksgiving. Mandated by federal law in 1990 to, the U.S. Global Change Research Program (USGCRP) is required deliver a report to Congress and the President no less than every four years.

The assessment comes on the heels of a special report issued by the Intergovernmental Panel on Climate Change that called for limiting global warming to 1.5 degrees C to avert some of the most extreme consequences predicted with the previous 2 degree goal outlined in previous international agreement. The report finds that limiting global warming to 1.5°C would require “rapid and far-reaching” transitions in land, energy, industry, buildings, transport, and cities.  (Read a response by Ruth Ivory-Moore, Program Director, Environment and Corporate Social Responsibility for ELCA Advocacy.)

According to the national climate assessment, “Observations collected around the world provide significant, clear, and compelling evidence that global average temperature is much higher, and is rising more rapidly, than anything modern civilization has experienced, with widespread and growing impacts.”

Email LAMPa to join our team of advocates working on climate change in Pennsylvania.

The report also highlights climate change affects and implications by region and state.

Key points in the report for Pennsylvania:

Other key points in the national assessment summary:

Read the ELCA Social Statement on Care for Creation.