Lutherans Raise Their Voices For God’s work. Our hands. 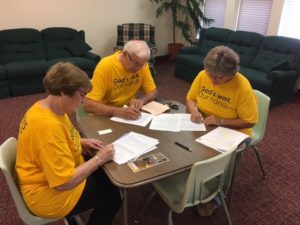 ELCA congregations across Pennsylvania shared their voices for “God’s work. Our hands” Sunday by addressing letters to legislators, federal and state, advocating on behalf of those whose voices may not always be heard.  As a result of their thoughtful advocacy, several hundred letters were shared with state and federal lawmakers.

“It was the first time this congregation participated in God’s Work Our Hands Sunday,” said the Rev. Brenda Martin of Holy Trinity Lutheran Church in Greenville. The congregation split into groups and had several activities. “We organized 2,800 pounds of food at our community’s food pantry that had been donated the previous week during a food drive. We also cleaned up an outdoor amphitheater at our town’s park.”

The congregation had brunch at the church after worship, and those participating had the chance to write letters to members of the military who have a connection to the congregation, Martin said. They also used letter templates from the ELCA advocacy office and made a list of all of the relevant members of Congress for members of the congregation, who live in both Ohio and Pennsylvania. “I wasn’t sure how the advocacy letters would be received, but was surprised and really pleased that we had a stack of letters to mail to the ELCA advocacy office in Washington for distribution.

“And here was a really interesting comment someone made to me: She said she’s been really upset about the divisiveness in the country, what’s happening in Washington, but doesn’t know what to do about it, so she’s feeling kind of frustrated and helpless. She appreciated that this was easy for her and helped her feel like she was contributing. She was really thankful she could take the letter template and add her own thoughts.

It made me really think that people would do more if we lead them and give them the tools to make it easier for them to participate in advocacy.”

“Participants willingly stopped by our table prior to heading out to their hands-on activity. They became familiar with the issue, asked several questions and took the time to take action. Our group included about a half dozen young people,” commented John Fry who assisted with the LAMPa advocacy table at St. James Lutheran Church, Gettysburg. “Many conversations provided an opportunity for education and feedback regarding several current issues. Several folks took materials along to share with others.” 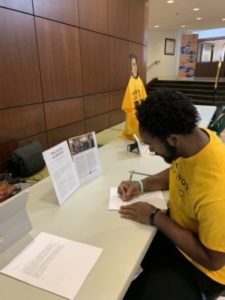 LaQuinn Thompson, Director of Community Outreach at St. Matthew, York, worked for the successful passage of the Safe Harbor Act, protecting child sex trafficking victims. Here, he signs a letter in support of House Bill 12, which would toughen penalties on traffickers.

In addition to addressing letters to state legislators and the United States Department of Agriculture, participants also partook in hands-on projects such as providing an ice cream social for a Lutheran retirement community; collecting food in multiple neighborhoods for a food pantry; assisting cleaning a fire hall; providing a meal for fruit-belt workers; packing backpacks for food insecure elementary students; and making quilts to share with Lutheran World Relief.

Letters were forwarded to the United States Department of Agriculture sharing public comments on the proposed changes to the Supplemental Nutrition Assistance Program (SNAP) rule that would eliminate 3.1 million children, families, disabled and older adults from access to SNAP benefits. In Pennsylvania, more than 1.7 million people use SNAP, according to the state Department of Human Services. Based on initial analysis, the administration estimates about 200,000 people in over 120,000 households could potentially lose the benefit. The estimated additional administrative costs to administer the program in Pennsylvania will be approximately $2.2 million per year in state costs, plus an estimated $1.57 billion in federal reimbursement of administrative costs to state agencies (for a total of $2,314 billion in additional administrative costs) over five years to administer.

You can extend your service throughout the year with resources from LAMPa. A variety of resources are available on our website, or contact us for other options related to your community’s needs.