LAMPa accompanied seven Pennsylvania Lutheran Disaster Response coordinators and synod representatives to the 2019 LDR Consultation in New Orleans in October to address climate change and its implications for our ministries.

This year’s gathering focused on building relationships with synodical, congregational and advocacy partners to address not only disaster relief but climate change mitigation and adaptation, part of a transformation to acknowledge the interrelationships of our ministries.

“There is great enthusiasm for building on these relationships and expertise for the good of our neighbors, near and far,” said LAMPa Director Tracey DePasquale.

Pennsylvanians have much at stake. With 86,000 miles of streams and rivers (second only to Alaska), we live in one of the most flood-prone states in the nation, with an economy still highly agricultural, and thus, increasingly vulnerable to climate change.  We also have much responsibility. Pennsylvania ranks as the fourth-largest greenhouse gas emitter in the country. 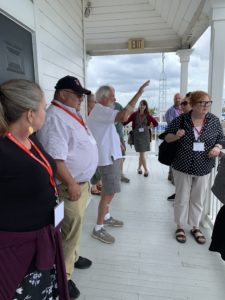 LDR Consult attendees stand on the porch of a restored lighthouse almost lost to Hurricane Katrina and listen to a volunteer with the Lake Ponchartrain Basin Foundation describe climate change impacts and attempts to build resiliency in Louisiana.

“Pennsylvania Lutherans have particular gifts to bring to bear, with strong ministries of disaster response and feeding the hungry,” DePasquale said. “We also have a clear call to be good stewards of all creation and to strive for justice and address systemic racism that exacerbates the suffering from disaster,” she said.

Climate change is affecting the most vulnerable first – those who live in flood-prone areas, often near hazardous current or former industrial sites and in communities with inadequate protective infrastructure. Often, there is no financial cushion to see them through or support system to flee to or fall back on because an entire community is affected. For many, flood insurance is not available because flood maps are no longer accurate. In parts of Pennsylvania, and around the globe, the most vulnerable are communities of color. Studies have shown that disasters are widening the gap between rich and poor – a gap that reflects a legacy of racism.  Even federal disaster aid favors the rich.

Would you like to join Lutherans across the state in a faithful response to climate change and disaster or host an educational event in your congregation or community? Contact us here!

At the gathering, attendees learned that addressing the human part of the equation with attention to poverty and culture, is essential to mitigating disaster.

“It’s really important to be considering not just the practicalities of recovery, but also the way larger issues like culture, inequality, and climate change intersect with it,” said Dr. Jennifer Trivedi, assistant professor of anthropology at the University of Delaware and core faculty member at the Disaster Research Center, who addressed those gathered about the important intersections in our ministries. “Being willing to talk about and take action on those intersections is a critical component to successful recovery and one that’s worth continuing to work toward.”

Julia Menzo, Lutheran Disaster Response Coordinator for Eastern Pennsylvania and director of community outreach for Liberty Lutheran/Lutheran Congregational Services, has been a leader in educating the church and her communities about the link between climate change and disaster as well as advocating for those whose lives have been disrupted by both.

“Human beings have an impact on the natural environment, for better and worse,” said Menzo, whose agency has been serving communities from flooded small towns such as Tremont, Pa., to those forced to flee Puerto Rico to Pennsylvania after Hurricane Maria. “There is consensus in the scientific community that Earth is warming, and that the warming is human caused. Where we live in Pennsylvania, that warming is supposed to lead to hotter, wetter, more volatile weather. We in the disaster community are seeing that already as we are more and more frequently responding to local flood disasters.

“Lutherans have a long-standing reputation of being strong partners in flood recovery. While we need to continue to serve communities impacted by flooding, I personally believe that if humans cause climate change, we also have the power to reverse it and to slow down the number of flooding events. The LDR event in New Orleans was a step in bringing people together in the ELCA network who are interested in creation care, disaster response, and community resiliency.

“I’m looking forward to partnering with people in Pennsylvania and the rest of the east coast to strategically consider how we can take collective action in the form of advocacy, education, resource sharing and more, to support individuals and congregations in living out our shared mission to seek justice for future generations and the marginalized of today, who will be most impacted by disasters caused by climate change.”

The Pennsylvania team saw some familiar faces of pastors and others who had once served or lived here and were now living and serving in areas recently devastated by wildfires or floods.  The Rev. Rob Swartz and wife, Katie, had moved to Redding, California, from Lower Susquehanna Synod just months before the massive fire tore through that community.  Friends and congregations from Pennsylvania generously sent funds and supplies to help with the recovery.  Now working with Lutheran Disaster Response in California, Katie joined others at the gathering in contemplating how, next time, they might also ask friends and congregations to write letters to lawmakers in support of policies to mitigate the climate change fueling disaster.

The gathering “was a great opportunity to network with a very good cross section of our brothers and sisters in Disaster Relief,” said Terry Brown, LAMPa Policy Council member and newly minted LDR coordinator for Upper Susquehanna Synod. “As a new member of the team, I was able to meet many of the people I may be working with when a disaster happens.” Brown has has more than 40 years as an emergency responder, both as a volunteer and in industry, having served as Chief of Emergency Services at the Merck Cherokee facility. He has numerous professional certifications and currently leads hazardous materials training and technical rescue training around the state.

“The presentations at the conference provided me with a better knowledge of how the climate changes and disasters are more closely related than I previously thought,” Brown said. Another key takeaway, he said, is something we know, but critical to remember in disaster response:  “When families are experiencing a major upset in their lives, remember to honor culture and ask what they need.”