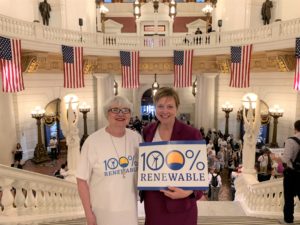 On June 19, Lutheran advocates from around the Commonwealth joined more than 300 rallying in the Capitol for a plan to get Pennsylvania to 100 percent renewable energy by 2050 in an attempt to avoid the worst consequences of climate change.

Advocates visited lawmakers to thank them for their support or to urge them to sign on to the legislation that would require the Commonwealth to achieve 100 percent renewable energy by 2050.  The bills, House Bill 1425 (Rabb-D-Philadelphia) and Senate Bill 630 (Killion-R-Delaware), have bipartisan support from more than 90 lawmakers so far.

“It was truly uplifting and energizing to come together with so many other folks of like mind and heart,” said Stephanie Myers, who advocated as a grandmother, retired science teacher, and member of St. Mark’s Lutheran Church in York. “The evidence is all around us that burning fossil fuels is making the earth most uninhabitable for those who are least to blame-whether human or non-human. This is why I advocate for the immediate transition to renewable energy- to speak for those who can’t speak for themselves.”

As ELCA Lutherans, we act in response to God’s love for all the world as well as a profound responsibility for it, believing we are called to be good stewards of the all that God has made.

“The present moment is a critical and urgent one, filled with both challenge and opportunity to act as individuals, citizens, leaders and communities of faith in solidarity with God’s good creation and in hope for our shared future,” ELCA Presiding Bishop Eaton wrote in her 2018 pastoral letter on climate change.

“It’s time for those of us who believe in a just transition to a renewable energy-powered Pennsylvania to come together and raise our collective voice in Harrisburg to demand climate action and environmental justice,” said Rabb.

Citizens attending the lobby day came from more than 35 Pennsylvania counties and all corners of the Commonwealth came out to Harrisburg to call for a transition to 100 percent renewable energy on the timeline called for by the scientific community. 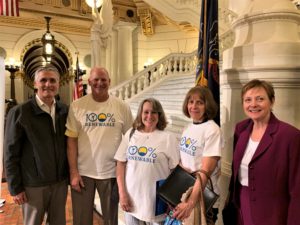 “It was gratifying to be surrounded by like-minded people from across the state that recognize we have one Earth, shared with us by our Creator, on which we can live,” said Lynn Fry, LAMPa program director. “We need to work together, using our God-given intelligence, to further develop and utilize renewable energy. We’re running out of time for our children and grandchildren!”

Rep. Elizabeth Fiedler (D-Philadelphia), called for bold action. “Climate change will devastate families across the Commonwealth and it will impact older Pennsylvanians, children and poor and working-class people soonest and hardest. Environmental justice and economic justice are deeply linked. We need a bold plan to transition to a renewable energy economy so that we can quite literally save our lives. That transition will bring jobs in wind, solar and energy efficiency and the opportunity to create a more just and fair economy that prioritizes the needs of frontline communities and our union brothers and sisters. Time is running out. We can do this, we must do this.”

Pennsylvania’s 100 percent renewable legislation is believed to be the only bill of its kind in the nation with a Republican primary sponsor.

“Moving Pennsylvania to 100 percent renewable energy means thousands of new jobs for workers and a cleaner environment for our families,” said Killion. “We must embrace the renewable energy revolution that is unfolding around the country. Our economic future and the health of our citizens and environment depend upon it.” 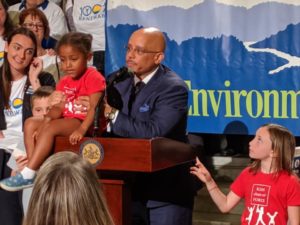 “The solution to fixing the threat to our children’s health from air pollution is the same as fixing the global ecological catastrophe of plastic pollution and the planetary climate crisis threatening humans and all life forms. The solution is to stop extracting and burning fossil fuels and instead make other arrangements for energy, transportation, agriculture, and materials with 100 percent clean, sustainable, renewable energy,” said Dr. Ned Ketyer, board member of Physicians for Social Responsibility and a medical consultant for Southwest Pennsylvania Environmental Health Project.

“Today, approximately $5.5 trillion have been divested from the fossil fuel industry and faith-based organizations are leading the way at 27 percent of those institutions making divestment commitments,” said The Rev. Dr. Vincent Kolb, Pastor of the 6th Presbyterian Church.

Rabbi Daniel Swartz, the Executive Director of the Coalition on the Environment and Jewish Life (COEJL), echoed this sentiment: “Each morning, Jews give thanks to God for renewing creation continuously. What better way, then, to fulfill our obligations l’taken et ha olam, to help repair the world, than to work for a 100 percent renewable energy future for Pennsylvania.  Let us keep faith with our children and our children’s children by starting to build that better future today.”