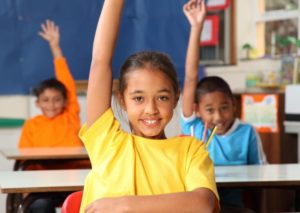 Level Up, a coalition of more than a dozen education advocacy organizations from across the commonwealth, launched a campaign on April 15th to increase state funding for the 100 most underfunded school districts in Pennsylvania. Pennsylvania ranks 44th in the nation for state share of funding for K-12 education and has some of the nation’s widest gaps between wealthy and poor school districts.

“It is no secret that hundreds of public schools across the commonwealth are grossly underfunded as a result of Pennsylvania’s property tax scheme and chronic underfunding at the state level,” said Rep. Mike Schlossberg. “The entire approach is unfair. It burdens taxpayers, threatens to leave students and families behind, and makes the difficult work of teachers almost impossible.” Rep. Schlossberg introduced House Bill 1167 on April 14 to support the most underfunded districts.

“The Level Up plan is a way to help students and communities who are footing the bill but not reaping the benefits,” said Rep. Schlossberg. “Across the 100 Level Up districts, this additional money can be used to hire more educators, upgrade schools built more than a century ago, and provide 21st century technology. If we truly believe that education is the great equalizer, then we have to fund education equally.”

The gap in education spending between districts is on the rise in Pennsylvania. Currently, the wealthiest district spends $4,800 more per pupil than the poorest. The Level Up coalition’s goal is to shrink the large gap between the resources schools have and what they need. The growing disparity among Pennsylvania’s wealthy and poor districts creates enormous inequity, leaving an entire generation of children in poor districts ill-prepared for the challenges and demands of tomorrow impacting local future workforce, tax base, and the state’s economy.

“At the current rate of increases in state educational spending, it will take decades or more for the most underfunded districts to reach adequate funding. Our children cannot wait.” said parent and school board member Robin Goodson of the School District of Lancaster. Read more about the campaign and legislation here.

Our ELCA Social Statement reminds us of the importance of affordable, quality education for all. Education is a “shared responsibility” that parents and congregations should foster, as it is part of our baptismal call. It is also a crucial piece of public life. Luther, a college professor, insisted that all people regardless of gender or wealth be educated so that the church and civil rulers might be held accountable. Advocating for Level Up’s campaign, and HB 1167, are ways in which Lutherans can support accessible and quality education for all.