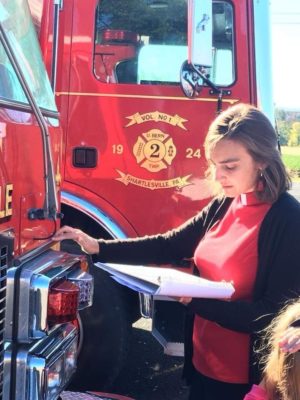 Inge Williams is the pastor of Friedens Church in Shartlesville, a hamlet at the base of the Blue Mountain in Berks County. Inge hails from the Midwest. Born in Ohio, she spent formative years in northeastern Lower Michigan. In 2014, she received her M.Div. from Trinity Lutheran Seminary in Columbus, Ohio.

Inge’s call to ordained ministry grew out of a realization of the seriousness of climate change. While organizing a garden project through her home congregation to bring fresh, local produce to hungry neighbors, she encountered a God of abundance and new life. Inge knows we cannot address poverty, hunger, and the uptick of disaster due to extreme weather without both local acts of discipleship and advocacy for systemic change.

While a student at Trinity Lutheran Seminary, she was an active member in the student creation-care group ‘SEEDS’ and served as sustainability intern with Ohio Interfaith Power & Light. She attended the Young Adult Eco-Justice Fellowship with Creation Justice Ministries in 2011 and ELCA World Hunger Ambassador training in 2015. She is a founding member of the Northeastern Pennsylvania Synod’s Creation Care Task Force and has organized congregational kayak trips on the Schuylkill River. In her free time, Inge enjoys spending time out-of-doors in all four seasons and playing old-time banjo.

Pastor Williams is grateful for this opportunity to serve on the policy council. She looks forward to getting to know the commonwealth and joining other Pennsylvania Lutherans in preserving our corner of God’s beloved world.