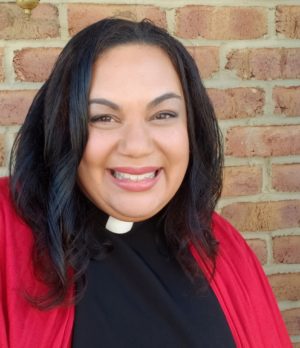 The Rev. Carla Christopher Wilson, Associate Pastor of Outreach and Faith Formation at Lutheran Church of the Good Shepherd in Lancaster,  will join the LAMPa Policy Council in September as a representative of the Lower Susquehanna Synod (LSS). She also co-chairs the Toward Racial Justice Task Force of the LSS and is a congregational coach and member of LSS’s Transformation Ministries Team.

“Carla is a gifted leader and is a strong advocate for people who are disenfranchised in our society,” said Bishop James S. Dunlop on appointing Wilson. “Her experience as community leader in York has enabled her to develop a clear public voice for advocacy. I am delighted that she agreed to serve in this capacity on behalf of the synod.”

“I believe strongly in the call to public witness that is a part of the ordination vows I took. As the one gathering place that works intimately with Pennsylvanians across age, race, gender, economic status, and more, I believe the church is uniquely equipped to be a partner in shaping policy that helps and heals the commonwealth,” said Pastor Wilson. “The commitment inspired by my faith to both love and serve my neighbor is at the core of justice seeking that is what love looks like played out in the public sphere.”

Pastor Wilson is a former professional community-based activist and was also the Poet Laureate of York, Pennsylvania (2011 – 2013). Carla studied psychology, education, and creative writing at Columbia University in the City of New York and spent years as an educator and case manager in domestic violence shelters, state prison systems, and school districts before connecting her belief in the power of the written and spoken word with her passion for activism, and now faith-based activism.

I’ve had the pleasure of getting to know Pastor Wilson during her time as vicar at Union Lutheran in York, and as a leader in the synod’s Toward Racial Justice Task Force,” said LAMPa Director Tracey DePasquale. “I’m excited about the tremendous passion and experience she brings to LAMPa’s mission.”

Carla has twice received the key to the city for her community empowerment and education initiatives, which include co-founding Equality Fest, a multi-thousand attendee festival in celebration of LGBTQIA+ Marriage Equality, in 2014 and the Rainbow Rose LGBTQIA+ Resource Center in 2019. She has been the force behind regional campaigns and activism training curriculum for groups like Food and Water Watch, Put People First – PA, the Y.W.C.A. of York County and several political campaigns. She has designed diversity programming for multiple school districts, businesses, and libraries, and has been a keynote speaker and workshop facilitator for dozens of organizations, nonprofits, and educational institutions around the globe, from Rutgers, Penn State, and Northern Arizona University to organizations in Kosovo, Albania, Flint, Chicago, Baltimore, Phoenix and Philadelphia in the last few years alone.