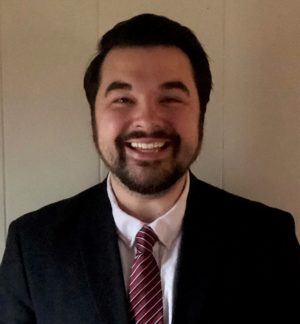 Dillon is a seminarian at United Lutheran Seminary and is currently working to earn his Master of Divinity. He is a candidate for rostered ministry in the NEPA Synod of the ELCA, and serves as Vicar at St. John’s Lutheran Church in Tamaqua.

Bishop Christopher deForest appointed Epler to the policy council to replace the Rev. Inge Williams, who served the maxiumum two consecutive terms. When asked to serve on the policy council, Epler said he did not hesitate.  He believes LAMPa,  through its advocacy, speaks to two great lines set forth in the ELCA’s 1991 social statement on Church in Society:

Epler said he believes Lutheran Christians are called to be active in the world by living out their baptismal promises, and by working alongside others in other faiths seeking the common good for all creation.

“We give thanks to God for the gifts and faithful service of Inge Williams,” said LAMPa Director Tracey DePasquale. “We look forward to years of learning and serving together with Dillon Epler as he begins his ministry in this synod so dedicated to ending hunger and caring for creation.”

Epler is a proud native of Schuylkill County, a 2010 graduate of Tamaqua Area High School,  and a 2014 graduate of Central Penn College where he earned his Bachelor of Science in Legal Studies with a concentration in Political Science.

After college, Epler worked for his college alma mater in the Department of Residence Life and Housing, while also working part-time as a Legislative Research Staffer for the Pennsylvania Senate. In the summer of 2018, he left his position at Central Penn College to attend law school. However, he discerned a call instead to seek full-time ministry.

He has been married to his wife, since 2019, and currently residences in Schuylkill County with his wife, daughter, daughter-on-the-way, and their cocker spaniel.