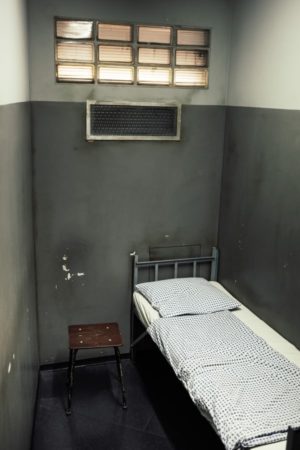 LAMPa advocates joined coalition partners and legislators at a press conference on Monday, February 3 to call upon the support of the Pennsylvania General Assembly to support HB 497 and SB 832, both of which seek to limit the use of solitary confinement in prisons because of the trauma it causes and its counter-productivity in preparing to restore people to life in the community.

The legislation would place a cap on the amount of time an individual can be placed in isolation to 15 days at a time. Both bills allow for positive alternatives to solitary confinement and provide step down programs for individuals who are currently being held in isolation. Lawmakers were invited to visit a model of a solitary confinement cell, set up in the East Wing rotunda this week, and learn more about the use and effects of this practice. Read media coverage of the event.

As representatives of the faith community in Pennsylvania, coalition partners believe that no human being is beyond redemption. Hebrews chapter 13 verse 3 calls upon us to “remember those who are in prison, as though in prison with them, and those who are mistreated, since you also are in the body.” We believe that we all belong to one body in Christ and share a common humanity. Therefore, we are deeply concerned about the mistreatment of individuals within our prison system.

Emily Schmid, advocacy programs associate with the Pennsylvania Council of Churches, remarked “I’ve met with activists, politicians, and formerly incarcerated individuals all of whom have convinced me that there is no such thing as an irredeemable human. Our criminal justice system as it currently stands is not rehabilitative. Practices such as solitary confinement leave human beings more broken than they were when they entered the prison system. My faith has led me to believe that no one is irredeemable. Some may say that this is naïve. I believe it is brave. All human beings, regardless of what they have done, deserve to be treated with human decency.” 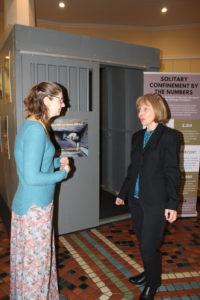 LAMPa Program Director Lynn Fry talks with Emily Schmid of the Pa. Council of Churches at a replica of a solitary confinement cell set up in the East Wing rotunda.

In addition to eliminating this inhumane practice, this legislation is needed because solitary confinement is:

2) Immoral
• In 2011, the U.N. special rapporteur on torture warned that solitary confinement “can amount to torture or cruel, inhuman, or degrading treatment or punishment when used as a punishment, during pre-trial detention, indefinitely or for a prolonged period, for persons with mental disabilities, or juveniles” and that it should not be used in excess of 15 days.
• According to the Inmate Handbook of the PADOC the maximum amount of time per misconduct that an incarcerated person may be sent to solitary is 90 days, and yet many individuals spend years and even decades in isolation.

3) Ineffective at promoting safety
• In 2015 Washington reported that their prisons are safer after replacing solitary confinement with alternative programs.
• After lowering their solitary confinement population by 85%, Colorado reported their lowest rate of prisoner on staff assaults in 9 years (Vera Institute of Justice 2015).

This legislation calls for the restriction of the practice of solitary confinement in Pennsylvania Prisons as it is harmful to individuals in multiple ways: 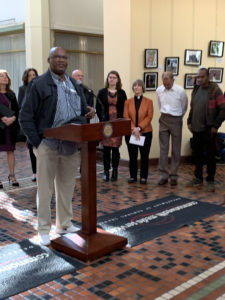 Doug Hollis, associate coordinator for Sound Community Solutions Inc., talks about his experience in prison and the degrading effects of solitary confinement at a Capitol press conference.

Mental Health Effects
• Individuals placed in solitary statistically develop psychopathologies at higher rates than those in the general population (28% vs. 15%) This includes anxiety, depression, anger, cognitive disturbances, perceptual distortions, paranoia, psychosis, and self-harm.
• A congressionally mandated audit of restrictive housing in federals prisons, by the Center for Naval Analyses’ Institute for Public Research, found that roughly 60% of the prisoners whose solitary cases were reviewed had serious undiagnosed or untreated mental illnesses.

Increased Rates of Recidivism
• Prisoners in solitary confinement lack access to counseling, family visits, phone calls, and other resources that have been shown to decrease the likelihood of recidivism. Furthermore, as noted above solitary confinement can cause antisocial tendencies and mental illnesses that can make a person more likely to commit violent acts.
• In Washington state, prisoners who were confined in solitary had a 20 to 25 percent higher recidivism rate than those in less-restrictive housing.
• In Maine, there was a dramatic reduction in the use of solitary confinement (419 to 15) and the Department of Corrections claims a one-year recidivism drop from 75 percent to between 15 and 20 percent.

Difficulty Returning to Society
• Despite the extreme psychological and social effect of solitary confinement, over 400 prisoners were released from solitary confinement directly back to the public every year in Pennsylvania between 2008 and 2014.
• Accounts from individuals who work directly with inmates and returning citizens note that prisoners who spent excessive amounts of time in solitary confinement often have trouble re-adjusting to life outside. One individual would not leave his room in his mother’s house for several months. A report from the Marshall Project tells the story of a man who developed agoraphobia after spending 22 years in solitary.

HB 497 and SB 832 have been referred to their respective judiciary committees.