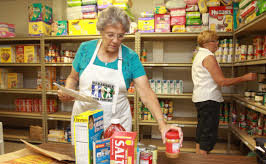 September is Hunger Action Month – a month where people all over America reflect, pray, stand together and act to   fight hunger. It’s a month to spread the word and take action on the hunger crisis, and dedicate ourselves to a solution.

At some point in 2016 (the most recent year available), more than 41.2 million people in the United States were unsure where their next meal might come from. More than 40.6 million Americans were living in poverty in 2016. For a family of four, this means their annual household income was below $24,563.

In Pennsylvania, hunger remains an epidemic with nearly 3 million residents turning to food pantries and meal service programs to feed themselves and their families in 2017. One in seven Pennsylvania residents remain at risk of going hungry.

How can you end hunger? Volunteer or contribute to local food pantries. Write letters to your congress member or letters to the editor lifting the need for systematic changes affecting hunger around the globe. Donate to ELCA World Hunger to support hunger programs around the world. Hunger resources may be found at: Ending Hunger in PA; ELCA World Hunger; and Feeding America.