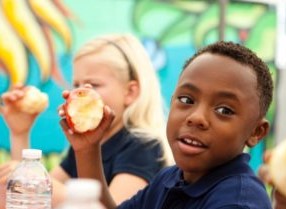 “Ask any teacher and they will tell you that food is the basic school supply,” said First Lady Frances Wolf as she addressed the first Local Food Alliances Convening held at the State Farm Show Complex, bringing together anti-hunger advocates, including ELCA hunger leaders, from around the state.

Although Pennsylvania was ranked among the top six states in the country in 2015-2016 for improving school breakfast participation for eligible low-income students, it still ranked 38th in terms of percentage of those participating.  Read the School Breakfast scorecard.

“We know breakfast is the most important meal of the day,” the First Lady said. “When children start the day with the nutrition they need, it has long-lasting consequences for the entire state. This is a smart investment.”

e Pennsylvania Department of Education as competitive grants to schools that adopt alternative breakfast delivery models, including “Breakfast After the Bell” programs in elementary schools and “Grab ‘n’ Go” models in middle and high schools. The funds will be targeted to schools with student populations with more than 60 percent of children receiving subsidized meals.

Last year, the Wolf Administration announced its food security plan, “Setting the Table: A Blueprint to for a Hunger-Free PA.” The plan lays out the administration’s goals of providing all Pennsylvanians with access to healthy, nutritious food, which will improve their well-being, health, and independence. One of the key goals of the Blueprint is to increase access to and participation in school breakfast programs for students who are eligible for free and reduced price lunch at school.  Lutheran advocates have been championing school breakfast at the local level for years.

Studies show that breakfast impacts a variety of outcomes in our children – both in academic progress, as well as behavior and the number of visits to the school nurse every day.