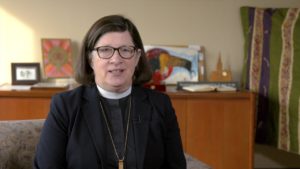 “Racism — a mix of power, privilege, and prejudice — is sin, a violation of God’s intention for humanity” (Freed in Christ: Race, Ethnicity, and Culture, 1993).

Centered in Christ, the 2019 Churchwide Assembly was significant in many ways: worship, thoughtful deliberation and prayer led to the adoption of memorials and resolutions that will shape this church for years to come. Among these decisions, this church was called to address the deadly power of racism and white supremacy. Martin Luther’s clear exposition of the gospel — that God justifies, that we are redeemed by the death and resurrection of Jesus, and that grace is a gift — not only makes it possible to engage in this work but gives us a framework in which to do it. The doctrine of justification is a great leveler. It acknowledges that no one group of people can claim supremacy over others. We are all deeply in need of grace, and God gives this gift to all. Standing equally under the judgement and promise of the gospel, we, as a church, can recognize the overt and covert ways that a culture of white supremacy denies full humanity to all people, and we can work to dismantle it.

• We offered a public apology titled “Declaration of the ELCA to People of African Descent.” In the context of the quadricentennial remembrance of American slavery in this country, we acknowledge that racism and white supremacy are deeply rooted in that history, and that the church is complicit. This apology “means working toward a deeper understanding of slavery and its legacy, of institutional and structural racism, of white privilege, and of attitudes and foundations of white supremacy.” It was accepted by the African Descent Lutheran Association with a call to accountability. You can watch the video here and utilize this explanation as a resource. In June the Council of the Lutheran World Federation, our global communion, also adopted a resolution commemorating the quadricentennial.

• We adopted a resolution condemning white supremacy. Through study, prayer and action, we call “all congregations of the Evangelical Lutheran Church in America to engage in communal study of the structures and rhetoric that empower and fuel racism and white supremacy and to take to heart the teaching of Scriptures, so we may all be better equipped to speak boldly about the equal dignity of all persons in the eyes of God.” Whether our churches and communities are racially diverse or predominantly white, this is work for all of us. We have several existing racial justice resources available to support this work.

• We adopted a resolution to establish June 17 as “Emanuel 9 Day of Repentance,” commemorating the martyrdom of Clementa C. Pinckney, Cynthia Marie Graham-Hurd, Susie Jackson, Ethel Lee Lance, Depayne Middleton-Doctor, Tywanza Sanders, Daniel L. Simmons, Sharonda Coleman-Singleton, and Myra Thompson by a violent white supremacist, Dylann Roof, who grew up in the ELCA. The resolution calls for June 17 as a day of repentance, grounded in prayer; worship resources are currently in development. It also calls for deepening conversations with the African Methodist Episcopal Church on matters of racism and white supremacy, and building upon the long-standing relations between our two churches. A letter I received from the senior episcopal leadership of the African Methodist Episcopal Council of Bishops noted that “Martin Luther was the ‘Great Reformer.’ Richard Allen started the AME Church to reform the racially divided American Christianity he experienced in his lifetime. It is appropriate that Churches birthed by these two persons who sought more authentic and true expressions of Christianity engage in conversations that will lead to 21st Century reform, justice, and reconciliation.” In response, I have acknowledged the significance of their willingness to engage in deeper conversations with us, as an affirmation of our striving to be accountable in and through authentic relationships. I shared my hope that our talks since 2015, as well as previous rounds of dialogue between our two churches, will enable us to develop new models that move us from dialogue to diapraxis, or dialogue in action, for the sake of our witness to our unity in Christ in these divisive and deadly times. As you think about possibilities in your local context, I commend to you the congregational resource we co-published in 1996, “Understanding One Another.”

These recent developments build upon the continuous work we are doing as the ELCA and in ecumenical partnership. Through bilateral work, such as our joint Statement of Mission with the African Methodist Episcopal Zion Church, and in councils and coalitions, especially the National Council of Churches and its A.C.T. Now to End Racism initiative and the cross-racial dialogue of the Conference of National Black Churches, we are doubling down on our work, witness and advocacy with other Christians against racism and white supremacy.

You, in congregations and synods, are identifying new and renewed possibilities for engaging in this difficult but life-giving work and witness. We take the next steps together assured that there is no longer that which divides us, for we are one in Christ Jesus.