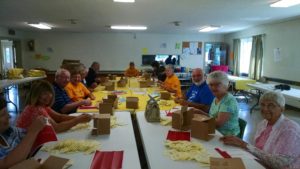 Safe Harbor legislation, which seeks to protect youth victims of sex trafficking, got a push in September by the Lower Susquehanna Synod Synodical Women’s Organization and by congregations who made it a part of the dedicated day of service and advocacy on Sept. 11.

Senate Bill 851 would provide protection from prosecution for minors for the crime of prostitution. It requires child welfare agencies to develop specialized services for minor victims of sex trafficking and requires training for PA State Police, intake officers, law enforcement, prosecutors and other staff focusing on trafficking victims. It would also establish a fund to enhance victim services and increase public awareness. Learn more.

The Lower Susquehanna Synod group passed a resolution to write to

Senator Greenleaf in support of Senate Bill 851, encourage individual members to contact their state senator to support this bill, and share the information about sexual exploitation of children in our state, noting that it is never the victim’s fault.  Read the resolution, passed in August. The group’s president, Joyce Ray, met with Sen. Greenleaf, who heads the Senate Judiciary Committee, in the spring and attended the Lutheran Day presentation about the issue of child sex trafficking in Pennsylvania.  In addition to the letter-writing campaign, her congregation, First Lutheran in Chambersburg, labeled bars of hotel soap with the number for the national Human Trafficking Hotline as part of the ELCA churchwide dedicated day of service. The labeled soap was sent to a national organization that places the bars in hotels in an effort to be a lifeline to those who are being sexually exploited.

“The Emmanuel and Apostles congregations care a lot about children, teens and women,” said Emmanuel’s pastor, the Rev. Linda Theophilus. “We chose the human trafficking project because it is very important and something we knew we could handle.  We contacted a Dominican sister who has experience placing soap with the human trafficking hotline in local hotels.  We got a Thrivent Financial for Lutherans Action Team grant to cover the cost of two cases of soap.  We wrote letters to our senator and to Sen. Greenleaf to thank them for sponsoring the bill.  We wrote to Sen Browne to encourage passing the bill in the Appropriations Committee.  And we wrote to our representatives to encourage their support as well.”

After sitting in the Appropriations Committee for nearly a year, the bill was moved back to Judiciary last week.  Join advocates in a rally in the East Wing Rotunda of the Capitol at 10:30 on Monday, Oct. 17 to push SB851 across the finish line before the end of this legislative session.  Contact LAMPa if you plan to attend.  Follow this link to send a letter to your lawmakers.