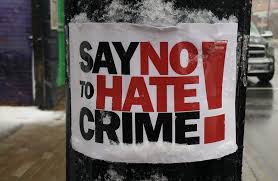 As high profile incidents of bigotry continue to be reported in local communities, Lutheran Advocacy Ministry in Pennsylvania (LAMPa) joins with other members of the Coalition Against Hate and state Rep. Dan Frankel calling for the PA House and Senate leadership to take action and to allow a vote on their bipartisan hate crime legislation.

“As we continue to see in communities across this state, hateful actions continue to be perpetrated against our neighbors simply because of who they are,” Frankel said. “We know that these types of interactions are increasing, and it is time for our legislature to take action. We cannot legislate what is in people’s hearts, but we can send a loud message that Pennsylvania stands together against hate and set an example as elected leaders by quickly moving this legislation forward.”

Over the weekend, news outlets widely reported an incident involving Pennsylvania’s Second Lady, Giselle Fetterman, who was a called a racial slur while shopping. In a second incident, anti-Semitic literature was left at the office of state Rep. Aaron Kaufer.

In a Facebook post regarding the incident, Kaufer said that it was “sad that we can’t move past hateful rhetoric that casts a negative shadow on our region.”

The Anti-Defamation League (ADL), the Pennsylvania Jewish Coalition and the Jewish Community Alliance of Northeastern PA issued the following statement upon learning of an offensive flyer left at the office of State Rep. Aaron Kaufer:

“We are deeply concerned that a threatening handwritten flyer, which reportedly included swastikas and messages calling the Republican Party “Nazis” and “like Hitler,” was anonymously left at the office of Pennsylvania State Rep. Aaron Kaufer. We are grateful for law enforcement’s swift response. No Jewish elected official should have to tolerate being targeted by anti-semitic hatred, especially accusing him or a political party of being like “Nazis.” This is deeply offensive and a perversion of history.

ADL’s latest data shows that anti-semitic incidents in Pennsylvania rose to their second-highest level in the past 40 years and hit record-breaking highs nationwide last year. Recent studies have also shown widespread ignorance about the history of the Holocaust. In this environment of rising anti-semitism, we must remain ever vigilant in rejecting hate wherever and whenever it arises.”