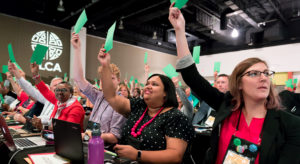 ​Gathering under the theme “We are church,” voting members of the 2019 Churchwide Assembly of the Evangelical Lutheran Church in America (ELCA) made a number of key decisions to further the mission and ministry of this church. The assembly, the chief legislative authority of the church, met August 5-10 at the Wisconsin Center in Milwaukee.

-Reelected on the first ballot the Rev. Elizabeth A. Eaton to a six-year term as ELCA presiding bishop.

-Elected Deacon Sue Rothmeyer to a six-year term as ELCA secretary. Rothmeyer, currently serving as executive for administration with the Office of the Secretary, was installed during the assembly’s closing worship on Aug. 10 and will begin her term November 1.

-Approved the social statement “Faith, Sexism and Justice: A Call to Action” and its implementing resolutions. The social statement, in part, names patriarchy and sexism as sins and calls the church to action on a range of issues, including gender-based violence, workplace discrimination and economic inequality.

-Adopted “A Declaration of Inter-Religious Commitment,” which will serve as church policy for inter-religious relations. The policy statement was adopted with the witness of 39 ecumenical and inter-religious guests in attendance.

-Adopted the “Strategy Toward Authentic Diversity in the ELCA,” which consists of a report and recommendations on how the ELCA exhibits authentic diversity and formulates goals for racial diversity and inclusion.

-Adopted 26 memorials en bloc, ranging in topics from gun violence to engagement in the Holy Land and gender identity to seminary tuition.

-Adopted a memorial that affirms the ELCA’s long-standing commitment to migrants and refugees and declares the ELCA a sanctuary church body.

-Adopted a memorial that calls for the development of a social statement and social message on the relationship of church and state.

-Adopted a memorial to support the vision and goals of the Poor People’s Campaign that align with the ELCA’s social teachings.

-Adopted a series of amendments to the “Constitutions, Bylaws and Continuing Resolutions of the Evangelical Lutheran Church in America,” including one that makes ordination the entrance rite for ministers of Word and Service, and an amendment to no longer count deacons as laypeople for representational principles.

-Adopted a resolution that committed the ELCA to support the World Council of Church’s “Thursdays in Black” campaign toward a world without rape and violence.

-Adopted a resolution to commemorate June 17 as a day of repentance in the ELCA for the martyrdom of the Emanuel 9—the nine people who were shot and killed June 17, 2015, during a Bible study at Emanuel African Methodist Episcopal Church in Charleston, S.C.

-Adopted a resolution to condemn white supremacy, calling all ELCA congregations to engage in a “study of the structures and rhetoric that empower and fuel racism and white supremacy and to take to heart the teaching of Scriptures, so we may all be better equipped to speak boldly about the equal dignity of all persons in the eyes of God.”

-Celebrated the end of Always Being Made New: The Campaign for the ELCA, which concluded June 30 with nearly $250 million raised in cash, multiyear commitments and planned gift commitments. At the 2013 ELCA Churchwide Assembly, voting members approved the $198 million campaign to help sustain and grow ministries of the church.