While Faith Leaders Call For End To Hate, Lawmakers Unveil Bills Meant to Address It 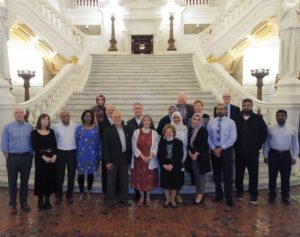 Leaders of diverse faith traditions were wrapping up a press conference in the state Capitol rotunda yesterday, calling for an end to hatred and violence, when lawmakers standing outside the Tree of Life synagogue in Pittsburgh announced a package of bills to address it.

The Capitol event, organized by the Harrisburg area Muslim community, drew speakers from many faiths expressing lament over the rash of violence occurring, not just against those of their own traditions, but of one another’s. See press coverage.

“I stand in solidarity with my Muslim sisters and brothers, who never fail to stand with and for my faith community,” said the Rev. Tabitha Ssonko of Monumental A.M.E. Church in Steelton. “They cried with us when Mother Emmanuel AME Church was devastated by a massacre, and we cried with them after the same thing happened at the Al Noor Mosque In Christchurch.”

“Those acts of violence spring from words of hate,” said the Rev. George Scott of Trinity Lutheran in East Berlin.  “And the time has come for us — the time is long overdue — to stand in solidarity against hate in all its forms.  The time has come for leaders of all communities and sectors of our society — religious leaders, business leaders, leaders in education, political leaders — to speak out and to take action against hatred.

“Words of hatred lead to violence,” Scott continued, “and we have a plague of hatred in our society right now, infecting our culture, a plague that chooses to demonize those who disagree with us, or look different from us, or act in ways we don’t understand.  This demonization of the other leads to hatred, and hatred leads to violence.”

“Like all other religions of the world, Islam delivers the utmost message of peace and harmony, condemns injustice and inequality, and gives us hope and glad tidings for maintaining goodness and uprightness,” said Erum Ahmad, speaking for the Muslim community in central Pennsylvania.

“We join with you and all of our neighbors across the state, the country, and the world to express our horror and outrage over the growing number of attacks against our places of worship, and indeed attacks based on hatred, fear, and misunderstanding of those we don’t know or understand,” said the Rev. Sandra Strauss of the Pennsylvania Council of Churches.

“As Christians,” Strauss said, “we choose the more radical path of love. We call upon our elected officials and anyone in roles of leadership to not just call for, but also work for an end to violence in any form in our communities, and to encourage dialogue and understanding.”

“I want to suggest that we must take special steps to fight hate,” said Michael Sand of Temple Beth El in Harrisburg.  “Killing worshippers when praying is an especially heinous form of hatred. And no one is spared.  A gunman in New Zealand killed Muslims in prayer.  A gunman in Pittsburgh and in San Diego killed Jews in prayer.  And a gunman in Sri Lanka killed Christians in prayer.

“This is a different type of threat and it requires a different type of solution,” Sand said.  “We are all children of God and we must all work together.  Just as individuals from numerous religions are joining here today in solidarity, we must work together when we leave.  All of us must pledge to fight hatred in our own community.  At attack on one of us is an attack on all of us.”

Half a state away, at the site of the October attack that killed 11 Jewish worshipers, lawmakers were announcing a package of bills to combat hate crimes.

The bills, to be introduced by Rep. Dan Frankel, who represents the district in which the massacre occurred, would increase civil and criminal penalties for hate crimes; provide education for those who have been convicted of such crimes; improve state tracking of hate crimes and their perpetrators;  update laws to protect LGBTQ and disabled people; create a private right of action for civil rights violations and create a reporting system for post-secondary education institutions.

Based on the diversity of voices present in the Capitol, legislators could see grassroots support for the bills that would have to overcome tensions around recent inflammatory actions on both sides of the aisle connected to religion. Republican and Democratic House leaders joined each other on the floor this week for a rare public scolding of their members for their behavior.

“One of my favorite parables in the Bible is the little story about the leaven in the loaf,” said the Rev. Thomas Sweet of Market Square Presbyterian Church. “It only takes a little bit of leaven for the whole loaf to rise.  So it is in making a peaceable world and a Beloved Community.  Let those of us who  passionately desire such a world be entirely committed to it, persisting through every obstacle, obscenity, or obstruction,  working and living toward it that through leaven such as us the whole world may rise.”