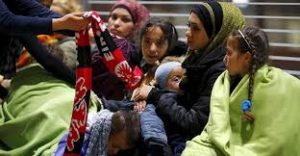 Lutherans have long supported ministries that assist people who have been forced to flee their homes or homelands due to disaster, violence, hunger and more. Lutherans in Pennsylvania have a long history of refugee resettlement, including current efforts to welcome refugees from Syria in the Lehigh Valley.

Governor Tom Wolf has declared his intention to continue to accept Syrian refugees. LAMPa is tracking movement of Senate Resoluation 248, legislation that advocates for the suspension of Syrian refugee resettlement.

Here are resources about how the US screens and settles refugees and tools for congregations who want to pray for, support and minister to uprooted peoples.

Infographic on the US Screening Process for Refugees

Lutherans and Refugees from the ELCA World Hunger blog

Congregations as Communities of Moral Deliberation (from the Journal for Lutheran Ethics and the ELCA Moral Discernment guide).

How you can support Syrian resettlement through LCFS