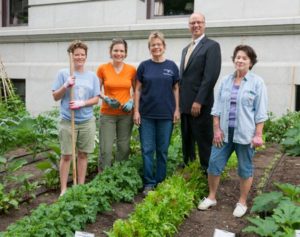 In March, LAMPa staff along with representatives of hunger agencies met with John Hanger, Pennsylvania Secretary of Policy and Planning, to share our priorities for addressing hunger in the Commonwealth. We were invited to the meeting after submitting a briefing paper on hunger for Governor Wolf’s transition team that outlined goals and steps to reduce food insecurity.

At the meeting, we asked that our new Governor take two important steps:
1. revive the “Blueprint for a Hunger-Free PA” to outline a strategy for addressing hunger, and
2. create a mechanism by which Pennsylvania could coordinate its hunger-fighting efforts, removing barriers to communication and action between its various departments that were impeding the Commonwealth’s ability to attack hunger in a strategic way.

Fast forward to September 28, and the Pennsylvania Food Security Summit at the Farm Show complex in Harrisburg, a direct outcome of our earlier requests. The day began with Governor Wolf issuing an executive order to appoint an advisor to lead a newly-formed ‘Governor’s Food Security Partnership.’ to coordinate Pennsylvania’ food and nutrition programs.

The Food Security Summit was sponsored by the Departments of Aging, Agriculture, Education, Community and Economic Development, Health, and Human Services. All six cabinet secretaries were present and participated in a panel discussion to address coordinating hunger issues within the public sector. “Food is a basic human right and no one should ever go hungry,” said Agriculture Secretary Russell Redding, who began the day. “When we have even one person who is facing a choice between paying the utility bill or buying food for the week, we have a fundamental problem. As public servants, it is not only our duty, but our responsibility to tackle food insecurity and provide needed resources to our residents. No one should go hungry.”

The executive order directs that the advisor to the governor be responsible for, among many things: the coordination of interdepartmental efforts to reduce hunger and improve nutrition; review and evaluate operations and policies of all state and federal food and nutrition programs administered by the commonwealth; organize private and public sector efforts to improve the commonwealth’s response to the needs of citizens; work with state and federal officials, as well as local providers, to increase the effectiveness and accessibility of federal and state programs; convene meetings and oversee activities of the new partnership; and present findings and recommendations of the partnership to the governor, associated state agencies, and the legislature.

According to Feeding America’s “Map the Meal Gap” data, more than 1.8 million Pennsylvanians – one out of seven – are at risk of hunger and may not know where their next meal is coming from. That number includes over 564,000 children – one out of five.

Governor Wolf’s 2015-2016 budget makes new investments in the commonwealth’s food security systems, proposing $3 million dollars to fund, for the first time, the Pennsylvania Agricultural Surplus System (PASS). Funds made available through PASS will provide the state’s emergency food providers with resources to support Pennsylvania’s agricultural producers, aiding in their efforts to get even more locally-produced and sourced commodities into the hands of those in need of food assistance.