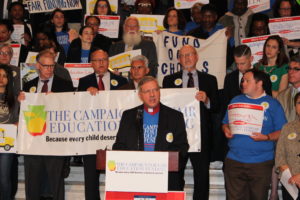 HARRISBURG (MAY 2, 2016) – As state lawmakers return from the primary election to focus on the 2016-’17 state budget, LAMPa advocates,  local school officials, parents, and others from the Campaign for Fair Education Funding rallied in the state Capitol to call for $400 million more in public school funding to be driven through the state’s new fair education funding formula.

The Rev. Dennis Ritter, LAMPa policy council member and former Kutztown Area school board member, urged the governor and legislature to make the formula permanent and to drive enough dollars through it to remediate the damage done by years of cuts and inequitable funding.

“The bipartisan state Basic Education Funding Commission’s proposal of a new school funding formula, if permanently adopted and adequately funded, would end these inequities and create a fairer basis for school funding among districts throughout the state,” Ritter said.  “Its permanent adoption would be a major win for all of Pennsylvania’s students, wherever they live and would help our state live up to the name  “Commonwealth.” ”

More than 200 Pennsylvanians from across the state – from western Beaver County along the Ohio border to Delaware County in the southeast – filled the Capitol rotunda to demonstrate what students in many rural, suburban and urban school districts are experiencing because of the state’s historically inequitable school funding system: packed elementary school classrooms; reductions in bus routes; outdated technology; and teachers being shuffled from one classroom to another, which impacts learning because the subject matter might fall out of their area of expertise.

The Rev. Carl D. Shankweiler, Secretary, Northeastern Pennsylvania Synod and board member of Tri-Valley School District, was among those holding signs in the rotunda expressing pleas from schoolchildren.

“Serving on a school board in a small rural district that has needed to cut many valuable programs can at times be depressing and leave a person feeling powerless, ” Shankweiler said. “The May 2 rally by the Campaign for Fair Education Funding showed me that we are not alone.  We are supported by a vast network of persons and organizations who also see the need for a fair, dependable income stream to all Pennsylvania schools.  I thank Lutheran Advocacy Ministry in Pennsylvania for being involved in this effort and for helping me to become more involved.”

While voicing support for the state’s enactment of a fair school funding formula for this year that distributes education dollars based on objective factors like student enrollment and need, rally goers and the Campaign’s more than 50 organizational members agree that the state’s school funding crisis is not over.

Noting that it took years without a public school funding formula for the state’s funding gap between wealthy and poor schools to grow to be the widest of any state in the country, Campaign members said that sustainable, predictable and long-term investment in public schools, using the new school funding formula, is needed to make sure all students – no matter where they live – can succeed in school and meet the state’s academic standards.

“An equitable basic education funding system is good for students and the state’s economy, but if the state continues to limit funding increases to the level approved in this year’s budget, infants in their cribs today will be out of high school by the time we achieve a fully-funded and fair public school funding system in Pennsylvania,” said Joan Benso, President and CEO of Pennsylvania Partnerships for Children (PPC).

Jody Sperry, school board president of Conneaut School District in rural Crawford County, spoke about how districts are being forced to limit spending, to the detriment of students.

“Classes that prepare students for the new millennium may have to be eliminated as we return to just the basics said,” said Sperry. “Ask any employer if the basics prepare a student for their workforce in the 21st century.”

The Campaign’s mission is to educate lawmakers and the public about the fact that the amount of money available to educate a child in Pennsylvania is insufficient and varies widely, depending on where each child happens to live. It is calling for the funding formula adopted by the bipartisan Basic Education Funding Commission, which was enacted for the current fiscal year, to be adopted on a more permanent basis, for state budget increases to ensure that the new formula is adequately funded, and for lawmakers to find the revenues needed to support those investments in Pennsylvania’s students that will pay dividends for all Pennsylvanians in the years to come.