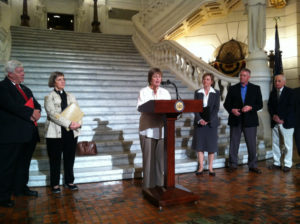 As this legislative session drew to a close, Pennsylvania Lutherans acted within a diverse coalition of 40 organizations to successfully stop a bill that would have taxed groceries and other necessities in a move to eliminate all property taxes. Senate Bill 76 would have shifted the burden of paying for public schools disproportionately onto the most vulnerable. Passed out of committee in the last weeks of session, it died without being voted by the full Senate, thanks to strong opposition from hunger advocates and others.
A similar measure was roundly defeated in the House earlier in the session, but with education funding a hot topic in Harrisburg, LAMPa joined opponents of the bill in a press conference as legislators prepared to adjourn before the election. The message: while there is desire for property tax reform, proposals that eliminate property taxes and shift the burden to sales tax on basic necessities would harm both schools and families already struggling to make ends meet.
The Independent Fiscal Office reported that SB 76’s tax shift would harm schools by funding them with less stable and unreliable sources of revenue that do not make up for all the lost revenue from property taxes.
Furthermore, SB 76’s tax shift would hurt senior citizens on fixed incomes and low-income Pennsylvanians who would have to pay sales tax on food, over-the-counter medications and many essential services.
“Too many Pennsylvanians — nearly 12 percent of households — are already struggling with hunger. Taxing groceries, as this bill allows, would only add to the burden they face in feeding their families,” Tracey DePasquale, associate director of Lutheran Advocacy Ministry in Pennsylvania, noted.
Joe Arthur, Executive Director of the Central Pennsylvania Food Bank, said, “I am also concerned that hundreds of thousands of Pennsylvanians that are now financially stable, but near the edge, would be pushed by these tax changes into also needing assistance to make ends meet, which will further harm the economic vitality of our communities and raise the burden on community organizations and taxpayers alike.”
SB 76’s tax shift also would eliminate the school property taxes paid by corporations and businesses, and unfairly shift the cost onto working Pennsylvanians in the form of higher income tax rates.
The Rev. Sandy Strauss, director of public advocacy for the Pennsylvania Council of Churches, stated, “SB 76 would make Pennsylvania’s highly regressive tax system — which hurts our most vulnerable neighbors — even worse. We believe justice dictates that those who have the most should bear a greater burden for providing resources that support and benefit our life together in Pennsylvania — especially funding for a public education system that prepares every Pennsylvanian to participate fully and successfully in our society. Shifting to a higher and broader sales tax and higher income tax would shift tax payments from profitable businesses and wealthy citizens onto the backs of those who already pay a much higher tax burden as a percentage of income.”
More fiscally sound and fairer forms of property tax relief exist. “Expanding and improving the state’s existing property tax relief programs, which haven’t kept pace with inflation, and reforming the property assessment system in Pennsylvania would provide taxpayers with relief in those areas with high property taxes without endangering the education of our children and the future of their schools,” Sharon Ward, director of the Pennsylvania Budget and Policy Center, said.
Camp Hill resident and taxpayer Philip Vollmer concluded his remarks with this succinct summation: “The issue of school property taxes needs to be resolved, but SB 76 isn’t the answer. The damage it would cause to our schools — loss of local control, uncertain financing — is too high a price to pay for getting rid of the property tax. SB 76 is a bad idea – well intentioned, but still a bad idea. It needs to be defeated, and the sooner the better.”