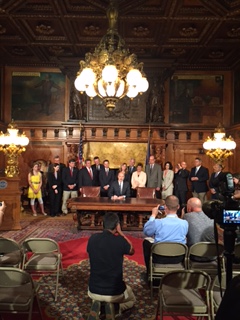 Gov. Tom Wolf signed the new school funding formula into law on June 3, but its impact on decreasing the wide disparities in student opportunities and taxpayer burdens between wealthy and poor districts depends upon the funding that flows through it.

The Campaign for Fair Education Funding, of which LAMPa is a member, applauded Governor Wolf for signing into law a fair funding formula for basic education sent to him by the General Assembly, a demonstration of  bipartisanship and acknowledgment of the need to more equitably distribute school funding.

“The formula is an important first step toward getting all Pennsylvania students what they need in the classroom,” saidCampaign spokesman Charlie Lyons. “The next step is to make sure it’s properly funded.”

He noted that Pennsylvania is ranked 46th in the country for its share of education funding – contributing only 36 percent, among the lowest in the nation according to the U.S. Census Bureau.

In addition, data from the National Center for Education Statistics show Pennsylvania has the widest funding gap between wealthy and poor districts of any state in the country, and per-pupil spending in Pennsylvania’s poorest districts is 33 percent less than in the wealthiest districts.

“The Campaign wants to see all new education funding driven out through the new formula, including significant annual education funding increases over the next several years,” Lyons said. “This is the most reasonable way to bring all public schools to a funding level that will give all students, no matter where they live, a fair shot at academic success.”

Meanwhile, as Pennsylvania’s school districts work to balance and finalize their 2016-17 budgets on the heels of the nine-month state budget impasse, unchecked mandated cost increases and unpaid state school construction reimbursements are forcing school districts across the commonwealth to cut instructional and extracurricular programs, reduce classroom and other staff and increase local property taxes.

Survey findings show that the 2015-16 state budget impasse forced 48 school districts (14%) to borrow a whopping $746 million to keep their schools open while more than 140 districts reduced, delayed or renegotiated payments to vendors. More than one-third of districts indicate they will need to borrow funds to meet fiscal obligations if the 2016-17 state budget is not approved by June 30.

Jim Buckheit, PASA executive director, responded to the survey stating “Following six years of continued cuts of educational programs and staff, and the lingering impact of the nine-month state budget stalemate, a considerable number of school districts have reached their tipping point, where without immediate state action to address these challenges, they will be able to offer only bare-bones educational programming to their students.”

The situation in Hanover Area School District, one of the districts profiled in the report, remains challenging even after the resolution of the budget impasse. According to Tom Cipriano, Jr., Business Administrator, “we’ve done all the tricks, but we’re spending so much time on negotiations and contingency plans to close schools, instead of doing the things that we’re supposed to be here to do.”

Similarly, Elizabeth Forward School District, another district profiled in the report, is feeling the strain due to unpredictable state funding levels and delayed state budgets. “These challenges have a disproportionate impact on less affluent districts and the children they serve, yet we’re all being judged by the same accountability standards,” said Rich Fantauzzi, Director of Finance and Operations.

The formula signed into law was unanimously approved last year by the bipartisan Basic Education Funding Commission and overwhelmingly passed by the General Assembly to help Pennsylvania begin the transition to fair and predictable funding.

The Campaign for Fair Education Funding is a statewide non-partisan effort made up of more than 50 organizations that, collectively, represent Pennsylvanians from every corner of the state: teachers and school administrators; representatives of charter schools and traditional public schools; urban and rural interests; business and organized labor; faith-based groups; and community groups.