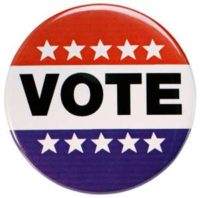 Counties must finalize their polling place locations by 20 days before the election. They are required to notify voters of polling place changes and may do so in a variety of ways. Contact your county elections office if you have questions.

You can also find your polling place using this online lookup tool.

In presidential years, the primary election is held on the fourth Tuesday of April.

In Pennsylvania, you can only vote for the candidates in the same political party you have named in your voter registration. For example, if you registered to vote as a member of the Republican Party then you can vote in the Republican primary, but not the Democratic primary.

All voters can vote on:

The Pennsylvania Department of State oversees elections in Pennsylvania. It’s their job to keep elections fair and honest. If you are aware of election fraud or irregularities, you can report it to them. You must be registered to vote in Pennsylvania to file a complaint using this online complaint form. Therefore, your name and address information must match your voter registration record.