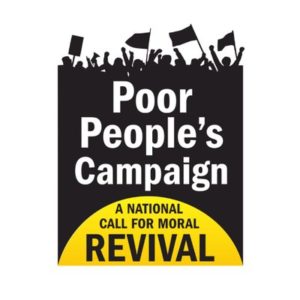 An attack on one group of poor people is an attack on all poor people. Around election time, the powers that be will unveil policies, statements and proposals designed to target a particular group of poor people and engage in divide and conquer politics. Whether it’s at the federal, state or local levels – efforts to restrict immigrants who are applying for citizenship’s access to public benefits, keep correspondence out of the hands of incarcerated loved ones or put money for affordable housing in the hands of wealthy developers, the Poor People’s Campaign participants know there is a war on the poor, and they won’t be silent anymore.

Candidates for the 10th Congressional District, as well as local state legislative candidates have been invited to hear the testimony of those they are hoping to represent.  RSVP today. Everyone is welcome.