Declaration of the ELCA To People of African Descent 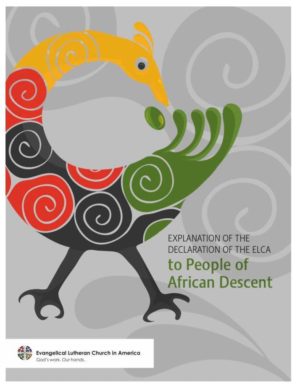 On June 27, 2019, the Church Council of the Evangelical Lutheran Church in America adopted the following declaration as a statement addressed to people of African descent.

The Evangelical Lutheran Church in America (ELCA) apologizes to people of African descent for its historical complicity in slavery and its enduring legacy of racism in the United States and globally. We lament the white church’s failure to work for the abolition of slavery and the perpetuation of racism in this church. We confess, repent and repudiate the times when this church has been silent in the face of racial injustice.

The ELCA acknowledges that slavery created and perpetuated racism, a truth this nation and this church have yet to fully embrace. The enslavement of Africans was based on a false narrative of the racial inferiority and the demonization of black people by the majority culture. Slavery was supported by white religious, legal, political, and scientific leaders and institutions for social, political, and economic gain. During the 246-year transatlantic slave trade, which began in 1619, an estimated 12 million people from Africa were stolen from their native lands, separated from their families, torn from their culture, killed for seeking freedom, tortured through inhumane forms of punishment, and subjected to lifetimes of captivity. While the white church stood silently by, people of African descent resisted through acts of rebellion, created new expressions of spirituality and Christian practice rooted in African traditions, and organized movements for freedom.

The ELCA teaches that racism is sin and that racism denies the reconciling work of the cross.1 Rooted in slavery, racism is manifested through the history of Jim Crow policies, racial segregation, the terror of lynching, extrajudicial killings by law enforcement, and the disproportionate incarceration of people of color.2 Descendants of formerly enslaved Africans are still denied equal access and opportunity in church and society while white people collectively benefit from unequal access, opportunity, and power. Institutional racism currently exists in the ELCA through discriminatory treatment within the call process; inequitable compensation of clergy of color; racial segregation; divestment from black communities and congregations; systemic polices and organizational practices; and failure to fully include the gifts of leadership and worship styles of people of African descent.

The ELCA trusts that repentance begins and ends with the work of a gracious God. In prayerful response to the African Descent Lutheran Association’s request for an apology, this church enters into a season of confession and lamentation. Beyond empty promises or well-meaning intentions, this church recommits to the work of racial justice, socioeconomic equity, and racial reconciliation. This apology is a recommitment to the process of right and equitable relations within this church, and the flourishing of Christ’s church universal. This recommitment means working toward a deeper understanding of slavery and its legacy, of institutional and structural racism, of white privilege, and of attitudes and foundations of white supremacy. It means praying for the renewal of this church as disciples of the living Christ.

Learn more about the ELCA Issued Apology and the churchwide assembly presentation of the “Declaration of the ELCA to People of African Descent,” which was accepted by the Rev. Lamont A. Wells, president of the African Descent Lutheran Association (ADLA), and members of ADLA.