Preserving the Foundations of our Advocacy 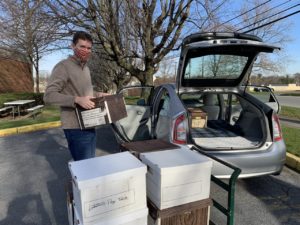 Files, files, files! The records of the oldest Lutheran state public policy office in the nation comes with a lot of paperwork. The 1979 Lutheran Coalition on Public Policy turned Lutheran Advocacy Ministry in Pennsylvania in 1992 has an extraordinary paper-trail detailing 41 years of faith-based advocacy in the commonwealth. I had the privilege of examining these documents as LAMPa prepares to close its office space and bring the organization’s work into the remote environment of the twenty-first century. LAMPa is letting go of this physical footprint, choosing instead to invest and live fully into the advocacy work it does in the Capitol and in congregations and other settings throughout Pennsylvania.

For much of this October and November I sorted through these documents before delivering them to United Lutheran Seminary for permanent archiving. I came across files upon files of agendas, board notes, correspondence, events, newspaper clippings, photographs, statements, and more. They showed me the history of an organization that strives to serve its neighbors at the highest levels of government. LAMPa and its networks often led the charge in cementing just policies that address numerous issues we face, such as: creation care; hunger; income inequality; and gender, racial, and sexual orientation discrimination. On occasion this put LAMPa, and the broader ELCA, in conflict with our brothers and sisters in Christ who hold other convictions and visions of what the relationship between the church and civil society should be. Always, though, LAMPa held true to its non-partisan nature and facilitated civil discourse on how best to serve all of God’s children.

Over the decades LAMPa sought to live out the social statements and messages of the ELCA not only in its direct work with coalitions and the legislature, but also by raising up new voices. “Lutheran Day” at the capitol is a cherished tradition used to bring new people to the advocacy table, and it continues to leave a strong legacy that will continue to grow. These historical documents bear witness to the relationship-building at the heart of advocacy work. LAMPa is not only committed to legislative engagement, but also to activism, community, congregational education, and social justice. Recently, through a partnership with ELCA World Hunger, the work has centered on hunger and poverty. No matter what the focus, though, the work has always been joined by our dutybound call to equip disciples to live into their baptismal call to strive for justice and peace on so many other fronts.

As I reflect on the boxes of documents now housed at ULS, I think of this statement from Martin Luther; “You are not only responsible for what you say, but also for what you do not say.” This has significance in our daily lives, as we are called to witness to the gospel in all aspects of our existence. To remain silent in the face of any injustice, even if it does not impact us, is unacceptable. It also makes me wonder at the breadth of advocacy work done by LAMPa over these four decades. It has sought to uphold the dignity and wellbeing of so many on behalf of Pennsylvania’s Lutherans. It is an office of accompaniment as we, as a commonwealth, seek to navigate the difficulties of a fallen world. Though remote, that work will continue now through a new decade, and with the support of its partners and the advocates it has helped to form. Thanks be to God for that!