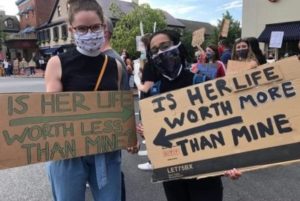 For three hours, I stood on the street and yelled “Black Lives Matter.”

Each time I yelled, I realized it was for my own life. My. Life. Matters.

With over 250+ people from Gettysburg, I stood in the center of town, at the crossroads, in a town that was the turning point of the Civil War and yet is a constant reminder with its confederate flags, confederate statues, and confederate-named roads that every single time Black people have tried to be treated as fully human we have been met with resistance. I am constantly confronted in Gettysburg with the history of this country and the permeating sin of White Supremacy and Racism that has woven itself into every fiber of American lives and systems.

At the end of the protest, some knelt and some of us laid on the ground for 8 minutes and 46 seconds in silence. The length of time the officer had his knee on George Floyd’s neck, killing him.

As I laid on the ground, I felt the weight of an entire community’s grief laid bare against the earth. I felt

the presence of my ancestors surround me as I laid there with those black bodies of the past, those present, and those in the future. I laid there and cried because all I wanted to do was get up … but I couldn’t because the weight of Racism forces us back down, time and time again. When I eventually picked myself off of the ground, I was numb and cold. A part of me had been left bare for the world to see. A piece of my dignity had been left on the street as my throat felt raw after screaming for hours that I couldn’t breathe.

I post these pictures because within them is a mixture of pain and hope. Hope that people see my life is worth fighting for. This is our generation’s fight and we have a chance to become better humans. To learn how we hurt each other and how we make mistakes and to learn from them.

America has a chance to heal the hurts that have been done and to listen and believe the people whose lives matter. To build a system where all people are treated with the dignity they deserve.
Think about how much we have to gain by listening and learning.

Elizabeth Peter is a graduate of United Lutheran Seminary and a candidate for the ordained ministry.