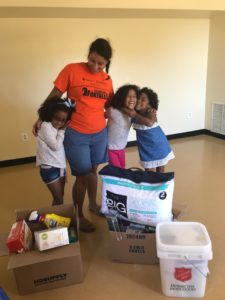 The 2017 Hurricane season hit the United States hard. Hurricane Harvey brought days of unrelenting rain to Texas. Irma brought wind and water damage to the Caribbean and Florida. Just on the coattails of Irma came Maria, which devastated the entire island of Puerto Rico and the US Virgin Islands.

Part of my role as Director of Community Outreach for Liberty Lutheran/Lutheran Congregational Services, is to administer the Lutheran Disaster Response (LDR) program for Eastern PA. Watching these storms cycle through in 2017, our team was gearing up to send cleanup buckets, provide messaging on the work of our partner social ministry organizations in the affected areas, and gather information for work teams interested in supporting recovery efforts.

By early October though, reports were coming through Pennsylvania school districts in York, Allentown, and Lancaster, that evacuees from Puerto Rico were seeking refuge in Pennsylvania.

Philadelphia’s Office of Emergency Management continued to get reports of evacuees arriving from Miami and San Juan at Philadelphia International Airport in order to seek out friends and extended family in Pennsylvania. 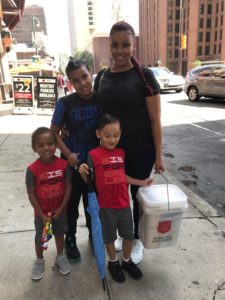 Working in the Lutheran Disaster Response network for over a decade now, our planning with partners from other disaster response organizations and government emergency management agencies did not include preparations for evacuees from so far away as Puerto Rico, at least not to the degree we were seeing. Philadelphia established a Disaster Assistance Recovery Center (DASC) and issued a daily report on the number of new families arriving. Some days there were upwards of twenty families per day registering. When the DASC closed in late December 2017, nearly 900 families (2,003 people) had self-reported as evacuees from Maria.

A year now after Maria devastated the USVI and Puerto Rico, it is estimated that there are between 4,000 and 6,000 families here in Pennsylvania who evacuated. Faced with challenges related to language, culture, weather, and especially housing, relocating has not been easy for many families.

With the help of family and friends, many newcomers found their way and are making a life in Pennsylvania now. A small percentage of families have returned to Puerto Rico. For several hundred families though, barriers to successful relocation remained dangerously many and dangerously high. Families with small children, some with medical needs, had no place to stay in the cold of winter. Local Hispanic agencies services were stressed with the increasing number of services being offered. Families were not able to find resources because most of the information was in English, not Spanish.

Fast forward to fall 2018, while there are still many families who are facing barriers to stable housing, and families still arriving in Pennsylvania on a weekly basis, thanks to advocacy, creative partnerships, and imagining new ways to implement best practices in disaster recovery, there are some great programs and possibilities for families who are new Pennsylvanians.

Here are some of the challenges faced and how they were overcome:

CHALLENGE: IDENTIFYING THE LOCAL COMMUNITY. The best practice of creating a long term recovery process is dependent on leadership from the affected community. The disaster took place in Puerto Rico, where then could leadership be identified?

RESOLUTION: LOOK FOR THE LEADERS. Hispanic agencies were already responding collectively to Puerto Rico by sending supplies and advocating for policy change related to The Jones Act regulating trade. Once these agencies, like Esperanza, Congreso, APM, and Ceiba, in Philadelphia were engaged, the disaster responding agencies and the Hispanic partner agencies alike were able to leverage connections and stakeholder groups to help meet the needs of newly arriving evacuees.

CHALLENGE: AFFORDABLE HOUSING. This is a known crisis in Pennsylvania. While extended family and friends opened arms to newcomers, lease agreements often did not allow for multiple family habitation for more than a couple of weeks. After that, housing became extremely insecure for many families.

RESOLUTION: SUPER PREFERENCE. Partners in long term recovery identified the possibility of utilizing a housing option called the Super Preference where affordable housing could be extended immediately to victims of a Federally Declared Disaster. It was not evident at first that the Super Preference could be used outside the disaster area, but once that was approved, nearly 50 families in Philadelphia were able to take advantage of this opportunity.

CHALLENGE: INADEQUATE NUMBER OF SPANISH SPEAKING STAFF AND VOLUNTEERS FROM HELPING AGENCIES. It was incredibly difficult to find Spanish speakers in any of our traditional disaster responding and emergency responding agencies to help evacuees complete paperwork or to provide them with information.

RESOLUTION: HISPANIC COMMUNITY. Agencies like Community Action Center of the Lehigh Valley, Casa Guadelupe in Allentown, Casa del Carmen in Philadelphia, and the Hispanic Center in Reading were critical partners in reaching evacuees. Without their partnership, information on FEMA services and other programs would not have been communicated.

These are just some of the challenges faced by evacuees and the agencies that provide services to the Hispanic community. LDR is part of a larger disaster responding community. Each partner brings unique gifts to the table. For example, the Salvation Army and the American Red Cross meet mass care needs. Team Rubicon and Southern Baptists are experts in debris removal. The strength of LDR is in the nature of the network that includes ELCA Churchwide in Chicago, synods, churches and social ministry organizations. Through this unique network, not only can we help organize processes like long term recovery, but we can also encourage churches to charitably provide turkey dinners to evacuees at Thanksgiving and winter coats for the winter. Our social statements give us direction related to service to the most vulnerable and care in creation. Many are calling Maria evacuees some of the first climate refugees. Our ELCA social statements call us to care for creation and meet the needs of the most vulnerable, as do our Baptismal promises.

As Lutheran Christians, we have a unique role to play in disaster response that is informed by our tradition of caring in communities, accompaniment, and responding to Christ’s call to love. Please prayerfully consider how we can civilly discuss the challenges above as well as those that will pit evacuees against established residents as we face the challenges of climate change. Please also continue to offer charity in the form of welcome kits, school kits, and gift cards to newcomers, as these seemingly small offerings are greatly appreciated by new Pennsylvanians.