From ELCAvotes to discipleship in a democracy – Amy E. Reumann

ELCA Lutherans have taken to heart “that energetic civic engagement is part of their baptismal vocation, both as individuals and through the church’s corporate witness” (ELCA social message on “Government and Civic Engagement in the United States: Discipleship in a Democracy,” pg. 14). Enthusiasm and responsibility for voting were relayed in the 2020 election, as in this social media post from Christopher Vergara of the ELCA Metropolitan New York Synod:

“Guess who voted in their first presidential election!?!? we were reminded throughout the whole experience – especially on this Día de los Muertos – of all those who have gone before, those who have fought for a long time and those who keep fighting, keep inspiring, keep kicking… We were going up the stairs to the voting area, when this older woman was barreling down the stairs. Her aide was chasing after her telling her to slow down. She said ‘I just voted, I feel so good my knees don’t even hurt!!!’”

Americans turned out to vote in record numbers last week, reaching the highest voting rate in 120 years. About 160 million people, 67% of eligible voters, participated despite long lines and extensive misinformation campaigns about when, where and how to vote. This extraordinary election took place under the health and safety challenges posed by a pandemic, calls for long overdue racial equity and the sometimes-disturbing discourse of a deeply polarized public. 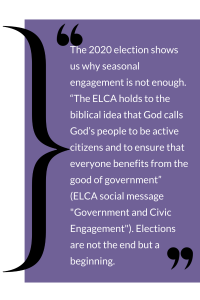 There is much for which we can be grateful. Threats of targeted violence and extensive intimidation did not materialize. Americans stepped up to serve as election officials, poll workers, get-out-the-vote organizers and election monitors. We experienced exuberant and robust participation that exemplifies what the social message describes, that “U.S. Lutherans have learned that their neighbors are best served by a government in which supreme earthly power is held publicly by the people (a democracy) and they are governed by representatives chosen in fair elections in which each person is assured of their vote (a republic)” (pg. 9).

There are worries, too. President Donald Trump continues to assert, without providing evidence, allegations of widespread voter fraud. Although the Department of Homeland Security has called the 2020 election “the most secure in American history,” the president has not yet conceded, raising concerns for an orderly transfer of power with worrisome implications for national security and pandemic response. Election season continues in Georgia, with two runoff elections that will determine the composition of the Senate. As a nation, the post-election result is that we are still fractured by divisions that must be addressed.

RAMPING UP OUR WITNESS 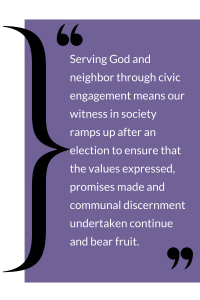 It is time for Lutherans to claim as a vocation in daily life their identity as disciples in a democracy. ELCAvotes has been a well-received initiative providing resources and community for Lutherans to be involved during the run up to elections and in voting rights work. The 2020 election shows us why seasonal engagement is not enough. “The ELCA holds to the biblical idea that God calls God’s people to be active citizens and to ensure that everyone benefits from the good of government” (pg. 14). Elections are not the end but a beginning. On Nov. 4, Vergara posted:

“I was reminded repeatedly yesterday how precious democracy is, and that protecting and engaging in it is not something to just take on every 4 years or, worse yet, outsource to others, but a solemn responsibility we as citizens must undertake individually, collectively, and continuously.”

Serving God and neighbor through civic engagement means our witness in society ramps up after an election to ensure that the values expressed, promises made and communal discernment undertaken continue and bear fruit. We now have the opportunity to build on the energy emerging from this election and push for meaningful reforms in the next Congress. This includes making our democracy work better, addressing distortions in power and access based on our national history of racial and economic exclusion, and implementing reforms that will ensure all voices are heard and have equal access to power structures.

As election results are finalized, there are several notable to-do items in the “lame duck” session that need our advocacy. Congress will have to pass a budget by Dec. 11 to avoid a government shutdown, and ELCA Advocacy is actively speaking to the appropriations bills now before the Senate. Our advocacy is needed in COVID-19 relief [use the Action Alert now to contribute your voice emphasizing urgent, just and compassionate response], for a robust package to serve as a bulwark against additional economic and health hardships for vulnerable and hungry populations. We are braced for a federal evictions moratorium that ends on December 30, and advocate for its renewal [use the Action Alert now for background and to spotlight the need for policy action]. God’s work continues through our hands and our voices.

The Rev. Amy E. Reumann serves as the Director of ELCA Advocacy.