Hello all! I am currently settling into my new life in Mexico and want to share some of my notices and wonderings with you all. While I do have a blog that many of you are already following, I also will send out more formal (and less frequent) newsletters that are sent out every two months. If you know of anyone that would like to be added to my newsletter list, please feel free to forward this email or contact me with the information at the bottom of the newsletter.

So what have I been up to? In short, a lot. Orientation in Chicago for a week and then three weeks of orientation in Mexico, traveling around to everyone’s site placements, taking Spanish lessons, and experiencing plenty of new things.

Orientation in Chicago was a whirlwind of learning more about the accompaniment model, which is walking alongside our partners rather than in front of them, and going over other details of our year. I got to become closer with my Mexico cohort and spend precious time with other beloved YAGMs that are serving in other countries around the globe. Our orientation has been an amazing (but exhausting) three weeks traveling around the country and visiting our different sites. We’re all within about 5-6 hours of each other and in vastly different places ranging from indigenous schools in the mountains to ranches full of adorable cows to a Mexican film restoration project. We will all have extremely different experiences of Mexico and I cannot wait to hear their stories. I am endlessly grateful for their support, their patience with my ridiculousness, and for our country coordinator, Meghan, who has selflessly sacrificed the last three weeks of her life dragging our sick selves around the country. It’s going to be hard to leave them all, but I am excited for what comes next.

In a few short days, I will begin volunteering at Casa Tochán, which is an all-male (with the exception of 2 spots for females for couples), long-term migrant shelter in Mexico City. As for what I’ll be doing, it’ll be a mix of everything and anything that they need from me. This whole year is about walking alongside people and being in communion with them, which often means that I won’t be doing what a lot of people in America would consider “productive” work. I’m not building a house. I’m not evangelizing and creating converts for the Lutheran church. I’m not feeding the five thousand. I am simply there to be a steady pair of hands where they need me, to sit, listen, and talk. To be simply…present. To learn more about this amazing culture and community I’ve been overwhelmingly welcomed into. And, of course, to tell you all about it!

I’ve been thinking about welcoming a lot lately. It not only plays into my blog title (Embracing the Stranger), but my life philosophy as well. As someone fiercely passionate about refugees and immigration work, the concept of welcoming is extremely important to me. Throughout history, humans have had a pretty bad track record with welcoming strangers, whether they be from different races, religions, nationalities, etc. It’s starkly evident today as countries around the world turn themselves inward out of hatred and fear, putting up walls instead of extending hands and locking up children when we should be ushering those fleeing fear into safe borders. While this is not a uniquely 21st century problem, this is a problem that we can solve in the 21st century.

Unlike how America and other nations around the world treat foreigners, I have been overwhelmingly welcomed with impossibly open arms. People who have never met me before have shown me the utmost kindness and gratitude—yes, gratitude—for simply being there. It is not a gratitude borne out of them believing them that I will “save” them from their problems, because I’m not here to do that, nor do I have the capacity to even attempt to do so. It’s a gratitude for simply being present in their lives and walking with them, if only for a few moments. It’s being present to bear witness to their daily lives, their stories, their history. This year isn’t about problem-solving, it’s about being part of a community and trying my best to bring those stories and lessons learned back home as respectfully as I can. I’m not necessarily “doing” anything in the sense of what is seen as “typical” mission work. But I am experiencing amazing things. From our initial host families during our week of Spanish lessons to site coordinators and the populations they serve to people in the ice cream shop and those who drive us, I have heard it again and again, both in English and Spanish, “Welcome. We’re so happy that you are here”. Which seems a bit bizarre to me, as I am the one that’s encroaching on their space. I’m the gringa who has all this privilege to take a year to live in Mexico doing what she loves and living out her faith. I’m the one that feels like I am inconveniencing people with my vegetarian diet, by stumbling through broken Spanish, with needing help with everything from navigating the bus and rail system to knowing how to get to and from anywhere. I’m the one that needs to be—and has been—thanking them for opening up their homes to me so generously for a whole year, for letting me work at their sites, for letting me walk into their community and learn about their lives. It’s incredibly humbling and a bit disorienting. In America, we may jokingly say that “mi casa es su casa”, but we rarely, if ever, mean it. Extended or unexpected guests are usually looked at as a burden, and people are far less likely to invite you into their home unconditionally. It’s an incredible cultural component I’m so, so privileged to be receiving.

I got the pleasure of visiting my site, Casa Tochán, on Monday the 10th, and am even more excited for what is to come. Though it’s a small shelter that can only hold about 30 men (and up to 2 women for couples), it’s an incredible, colorful space full of people with the most incredible stories and volunteers with the biggest hearts. I got to hear a few of their stories that left me in shock and in tears. The worst of humanity is found in migrant’s stories, from gang violence to kidnappings and killed family members. But the most resilient part of humanity is also found in their stories—from their persistence in trying to cross borders (either Mexico or the US’s) after being deported again and again in the search for a better life to keeping their faith and thanking God that they have made it this far. It’s hard to see where God is in the lives of people who have been kidnapped, beaten, shot, and cast out from virtually every country they try and find refuge in, but God lives in the downtrodden and walks alongside them and suffers with them. These men were no exception. It makes my heart ache for and with them and I so desperately wish that everyone in America would hear their stories and practice sympathy and empathy, welcoming those who are fleeing poverty and violence of all kinds and going to the supposed promised land that many of us were lucky enough to be born into. 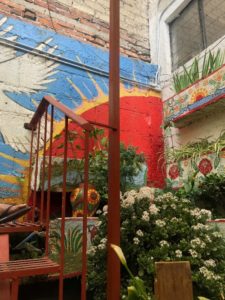 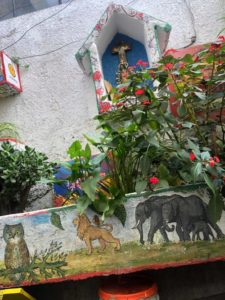 Here are some photos of Casa Tochán! There will be plenty more to come on my blog & next newsletter, don’t worry!

Visiting both here and Sagrada Familia, a short-term migrant shelter along the tracks of La Bestia, the train that many Central American migrants take to the US has really brought things close to home for me. I’ve researched and read a lot about migration and worked with migrants/refugees after they’ve arrived in the US, but seeing the actual phases of the journey is hard. Really, really hard. Knowing that I have all this privilege and access and can just get on a plane and travel to virtually any country is hard when you see these people whose lives have been defined by lines on maps. Who don’t have the freedom of movement and who have to face an incredibly, incredibly perilous journey because there is simply no other way in due to restrictive immigration policies worldwide. This work is hard. Any kind of social justice work is, but that isn’t the point. The point is change, and if I can leave this year changing one person’s mind about immigration and our dear neighbor, it will have been worth it. 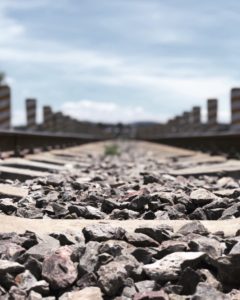 The tracks of La Bestia (“The Beast”), the train that many Central American migrants take to get to Mexico and the US. The posts with yellow stripes on them were set up by the Mexican government to dissuade immigrants from jumping off the train. This has not decreased immigration, but does make the journey that much more dangerous and has resulted in many injuries and permanent maiming.

I’m very, very happy in Mexico. I’m enraptured by the beautiful, crazy megapolis of Mexico City. I’m in love with the hardworking and hospitable culture. And of course, the food is beyond description. The sun still shines the same here, birds still sing, children still play, and people love fiercely and deeply. Our neighbor is not a monstrous country with no morals and little respect for law—it is a beautiful, complicated place that we should want to know more about and reach out towards instead of building a wall in-between. I hope that I can make you all fall in love with Mexico as much as I have already.

Thank you all for your continued support. If you are of faith, please pray for my continued health, emotional and mental strength, the migrants and volunteers of Casa Tochán, and for the communities I will be walking alongside: my host family, my larger Mexico City community, and all the other YAGMs, both in Mexico and around the world.
Con gusto,
Jenna