By the Rev. Amy E. Reumann, Director of ELCA Advocacy 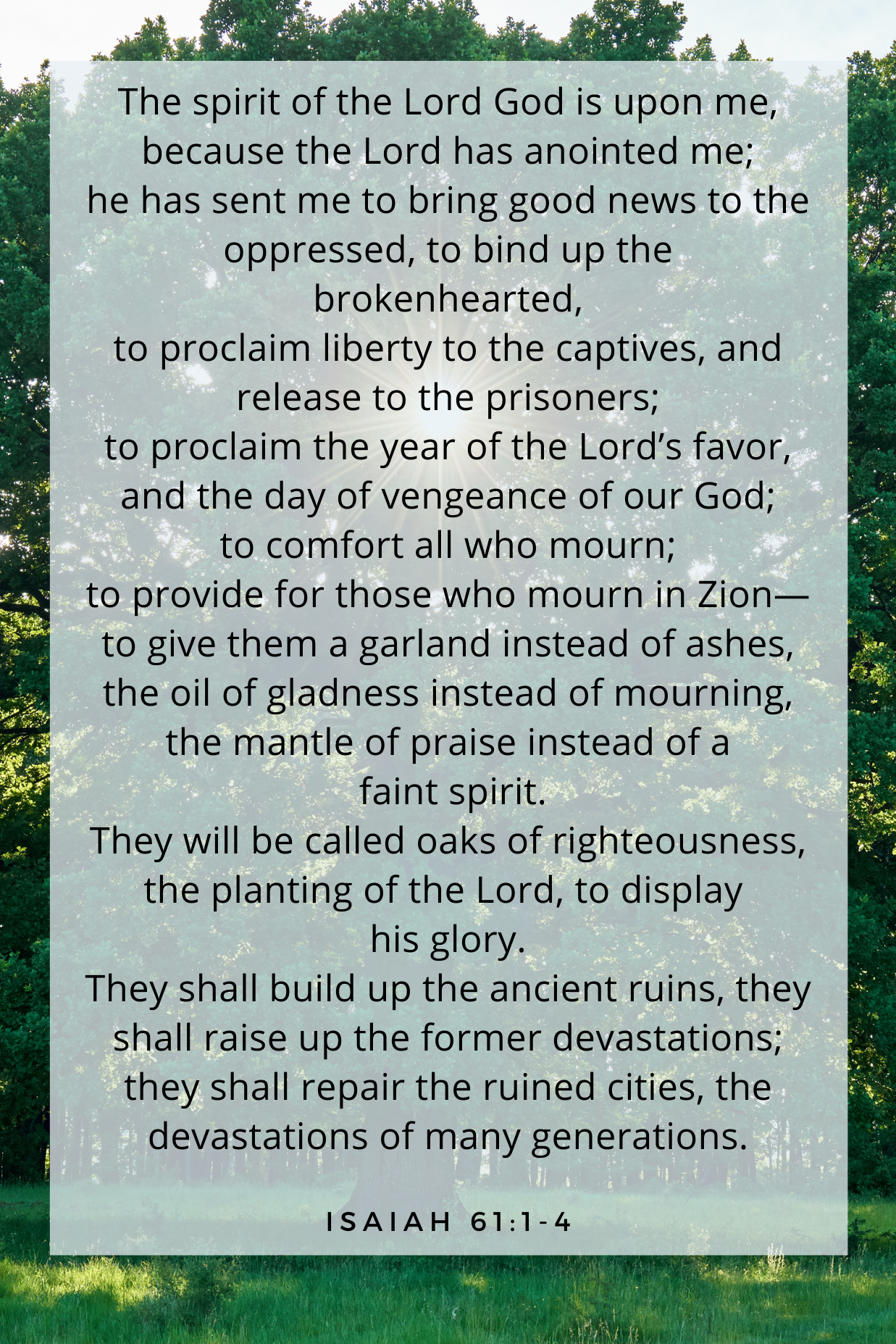 In the days since the insurrection at the U.S. Capitol, the words of the 61st chapter of Isaiah have accompanied me as a prayer and as a promise. It is one of the texts I turned to as I fearfully watched the violent mob of President Trump’s supporters, bent on overturning the election results, breach the doors on January 6 and overrun the seat of American democracy. I prayed the words as the fuller horror emerged, including the tragic death of a Capitol Police officer and of rioters, details about the imminent danger to people I care about and destruction in a place that I love. The prophet’s words direct me now in pondering the role of the church in rebuilding, including telling the truth about the forces of racism and white supremacy that lie at the root of the insurrection and whose repudiation and dismantling in church and society are inseparable from our proclamation of the Gospel.

After the attack I kept hearing the refrain “This is not who we are!” from mostly white Americans horrified by the violence that they saw. I understand that tempting assertion. These are not our nation’s ideals or our national myth, and I don’t want this to be who we are either. But nothing will change unless we acknowledge that last week’s violence and ongoing threats are direct expressions of our nation’s deep-rooted white supremacy intertwined with a resurgent Christian nationalism. Neither are new, but both have been given new sanction and virulent life by President Trump’s rhetoric and policies. Saying “this is not who we are” is a lie that abdicates our individual and collective sin and complicity.

Martin Luther said that a theologian of the cross calls the thing what it actually is, in contrast to a theology of glory which calls evil good and good evil. ELCA Metropolitan Chicago Synod Bishop Yehiel Curry’s blog post, “If It Was Us We Would’ve Been Shot,” and Missouri’s U.S. Rep. Cori Bush’s op-ed, “This is the America that Black people know,” are some of the voices calling issues by name, saying this IS who we are. They are calling out the disparate treatment of the largely white crowd that was allowed to converge on the Capitol despite weeks of threats and plans to violently overturn the election in President Trump’s favor. They and many others are outraged but not surprised by white supremacy at work in the widely contrasting preparations and response to white supporters of the President, and in the privilege operating that could have allowed this insurgency to succeed.

We need to call what it actually is another thing: the fusion of Christian nationalism with violent insurrection. The cross, signs reading “Proud American Christian,” and banners bearing the name of Jesus were carried next to Confederate flags and among people outfitted for violence. Insurrectionists appealed to faith as a justification for their assault on the Capitol, including a “Jericho March” that would bring down the walls of the Capitol. I want to again say “this is not who we are,” but that too would be a lie. This is a face of Christianity in our nation, and although unrecognizable to me, these are our kin, and it is our responsibility to repent and denounce this perversion of the Gospel. 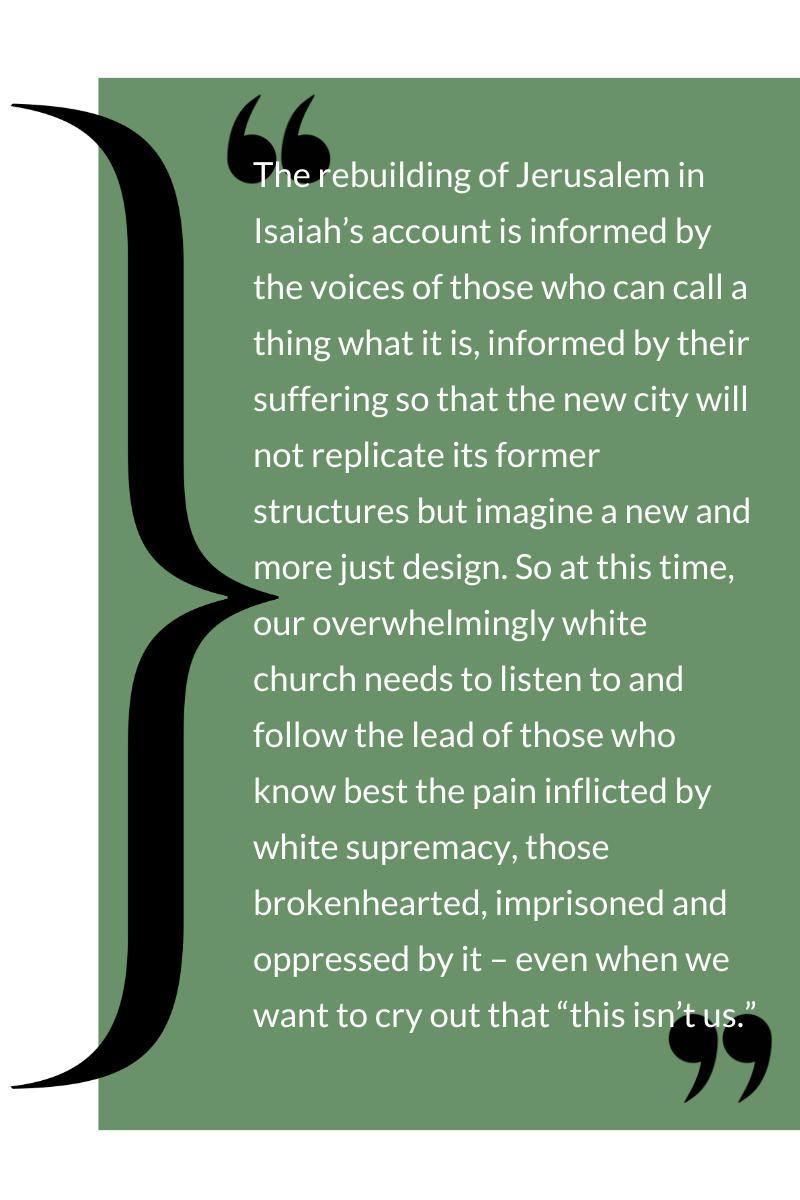 Where do we go from here? There is much to do to tend to those traumatized by the event. We need to hold leaders, rioters and their supporters accountable and to ensure this never happens again. And for our ELCA, I suggest we go deep and learn from Isaiah about some first steps to address white supremacy and Christian nationalism.

The prophet Isaiah’s 61st chapter announces to the returned exiles the anointing of God’s servant and the rebuilding the ruins of Jerusalem, her institutions and common life. This week I noted new learning from this text. Rebuilding will be led not by the elites but by those who have suffered most under the current order – the oppressed, the brokenhearted and the captives. The ones who know the weight of injustice, who have been on the receiving end of violence and whose hearts have been broken by the trauma of loss are charged with raising up the former devastations. They are the leaders for shaping a new and more just nation.

The rebuilding of Jerusalem in Isaiah’s account is informed by the voices of those who can call a thing what it is, informed by their suffering so that the new city will not replicate its former structures but imagine a new and more just design. So at this time, our overwhelmingly white church needs to listen to and follow the lead of those who know best the pain inflicted by white supremacy, those brokenhearted, imprisoned and oppressed by it – even when we want to cry out that “this isn’t us.” We need to hear the pain and follow this leadership on how to respond and raise up the former devastations. We need to learn to identify and preach and teach about the dangers of white Christian nationalism as heresy and violence.

The servant of Isaiah 61 came to preach good news to the poor. The servant’s job was proclamation of God’s word of healing and liberation, and then getting out of the way so that the oaks of righteousness could get to work, unleashing their energy and creativity into repairing their society. It is what Jesus did when he stood in the synagogue to read from this chapter. He announced his priorities with these words and then asked his followers to go and do likewise.

This is who we are – Jesus’ disciples who are broken but also blessed. Sinful but also forgiven. Fearful but also called to serve. Called and sent to renew and repair.